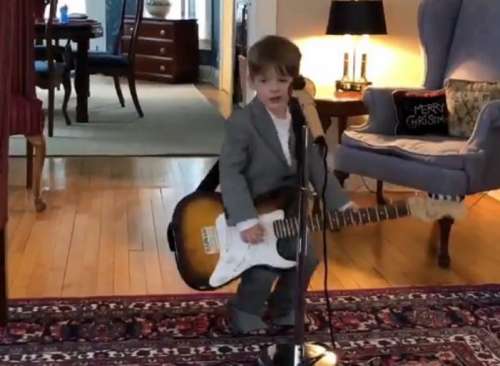 Talking Heads’ 1984 concert film Stop Making Sense is a classic — arguably the pinnacle of what singer/songwriter David Byrne accomplished with the genre-defying band throughout its time together. It’s the sort of record, and band, that warrants appreciation and attention even decades after its members went their separate ways.

As the years roll along, it’s important for parents to instill in their children an appreciation of the classics and of the music they grew up listening to and enjoying, as means of continuing the legacy these musical acts created. The children are the future, after all, so why not tell them all about David Byrne and Talking Heads? Seems like a great idea to us.

With that in mind, here’s a video shared by a proud mother on Christmas of her three-year-old son mimicking Byrne’s Stop Making Sense look:

My 3 year old is so obsessed with David Byrne that all he wanted from Santa was an electric guitar, a mic, and a ‘Stop Making Sense’ suit. pic.twitter.com/SGfY7XK4YO

Very nicely done, young man — and Mom! That’s how you do it. Byrne himself approved:

So cool! Happy Holidays to you both! https://t.co/YHoIYfzdZ4