Let’s get theological for a second. What is God? Thanks to Matt Groening, God is Beardy-Sky-Man. He could squash you with his thumb and for some reason, you never get to see his face. I often question my infant mind but it’s this image that materialises every time I see a place of worship – just Him and Homer on the couch discussing Sunday Football (Season 4 Episode 3, Homer the Heretic).

While certainly hilarious, George Meyer’s depiction is not the God of which I speak. Meyer does get one thing right though. God is mighty.

For those not born and bred on our yellow-skinned darlings, God is the creator of the heavens and the earth, he poisoned an apple, he built a big boat and he did some questionable shit to his son. But for the believers, it’s the fruits of these labours, these sacrifices, that bind their love and devotion to the definitive power of their lord.

Dearest reader, if you were to consider my juvenile, ill-thought opinion, then you’d find that the latter is complete and utter bupkis. But I did see David Byrne play last week and by fuck was it religious. 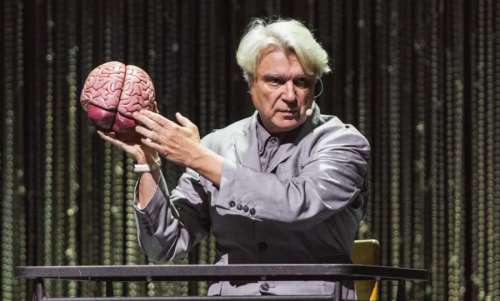 To take a lesson from our devout comrades, God is love and nurture. He is the driving force that keeps them on the straight and narrow. God is an ideal to live by. Spiritually, God is what drives your character. Whether that’s family, money or Seinfeld, the idea of God isn’t just Beardy-Sky-Man. It’s the passions you cherish.

To apply this notion to David, my sweet sweet David, like the lord above his creations are divine. I engage with his testament thrice daily. His words are poetic, of love and existence. In the humbling words of Homer (Simpson), “If everyone here were like Ned Flanders [David Byrne] there’d be no need for heaven, we’d already be there.” And yes, I gently weep as I write this.

Now while we could delve into Friedrich Nietzsche’s palpable idea of ‘God Is Dead’, let’s not. Because to be honest I don’t really have a good handle on the concept and to further that honesty, I’m a bit dumb. I mean I started this piece comparing God to The Simpsons. Fred sounds a bit dreary anyway. Let’s continue.

It’s 2008, it’s Engadine High School and I’m 16. Rather than wade through the incessant scores of genre-ist metal, I found holy ground on the stepping-stones of the MicroKorg and indie rock. LCD Soundsystem, New Young Pony Club, Bang Gang DJs, blah blah blah (not a band, just a summing up of all the bands)… I immersed myself.

For my growing brain, somewhat hindered by underage alcohol consumption, DFA & Modular were my church. My next sermon would be Midnight Juggernauts at The Enmore Theatre. Life was fantastic.

Though as I grew, so too did my annoying compulsion for more. What bands was James Murphy talking about? Suicide? Was he really there? All questions I needed answers to. Like a pubescent, bumbling Dr. Who, the further I traipsed back the more similarities I found. This percussive weirdo sound had a past; it had origins in the unknown – in Mum’s favourite band, Talking Heads.

Obviously, yes, I’d heard of Talking Heads before. But that was when my Mum wasn’t cool. When car rides were full of Steve Miller and shit. She could have played Innerspeaker and I still would have hated it. So yeah, Mum’s cool, but not heaps cool. Steve Miller – yuck. Regardless, she showed me the early incantations of Talking Heads. A shepherd if you will. I had found my messiah. I had found David Byrne. 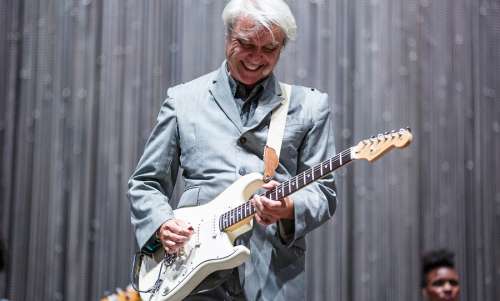 The three pillars of my existence quickly became, and still are, Remain In Light, Fear Of Music and Speaking In Tongues. They are the best records ever made by human hand and if you oppose I really couldn’t give a flying frog. Go tell someone who cares because over here we drink from Byrne’s holy chalice and read from the sacred doctrine that is Talking Heads. Go suck a lemon.

To the night in question, well, I have few words. It was a theatrical lesson in percussive virtuosity. There were no shoes. Byrne opened clutching a human brain and not an eye battered. Sound a little ridiculous? Well much like Moses’ dictation of the burning bush at Mount Horeb, such believability is difficult unless you’re one of the devout, one of the hopeless followers. In which case you were probably there, and if you weren’t, well, peace be with you. Solace can always be found in what is left behind. Look to the pillars my friends.

So to those who mock my fanatical gushings, and those religiously endowed to which these expositions are frequent – I simply say, for 104 minutes I existed within the physical realm of my God.