David Byrne’s show at the Orpheum Theater Wednesday night was like nothing I’ve ever seen before.

Most artists who have been around for decades (Byrne turned 66 on Monday) are content to ride the good vibes of their previous peaks. Their erstwhile fans sit patiently through any new songs to get to the old favorites, which are judged largely by how closely they resemble the original version from decades ago. For such legacy acts, the highest possible praise is, “They’ve still got it!”

Not only has David Byrne still got it (he looks and sounds great), but he brings something completely different as well. His “American Utopia” tour stripped down any preconceptions about what a rock concert is, and then rebuilt it as something unexpected and thrilling.

The Orpheum audience sensed something was afoot during intermission, when the stage wasn’t stormed by roadies setting up equipment. No drum set, no microphone stands, no wires. Instead, the stage was a bare floor, surrounded on three sides by a silvery curtain. In the center of the stage was a wooden table with a single spotlight shining on it. On the table was a model of a human brain. 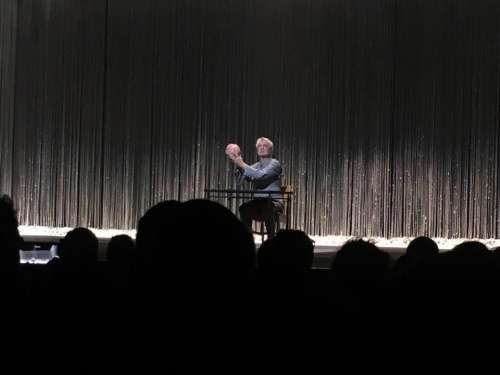 Finally the lights dimmed and Byrne stepped out, barefoot in a gray suit. He sat at the table, holding the brain and singing “Here,” a new song about the inner workings of the brain. “Here is an area of great confusion/Here is a section that's extremely precise,” he sang, pointing to the model like he was giving a lecture.

After “Here” was done, the table was removed, and 11 other musicians, also in gray suits, slipped through the curtains and onto the stage. Every one of them had their instruments strapped to them, able to have complete freedom of movement around the stage.

As the band played old favorites like “This Must Be The Place (Naïve Melody)” or new songs like “Everybody Is Coming to My House,” the dozen players moved around the stage in elaborate choreographed routines — running in circles, weaving in and out of each other, voguing in unison. 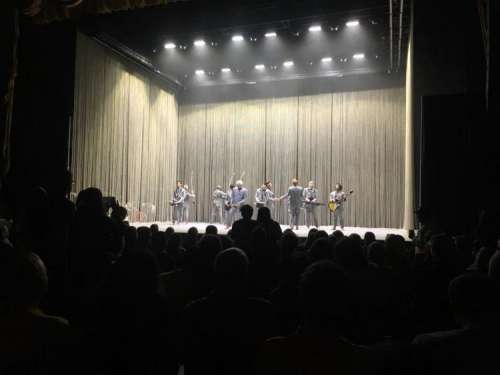 As the documentary “Contemporary Color” showed, Byrne has become an enthusiastic patron of high school color guards in recent years, wowed by their passion and precision. Those drumlines clearly inspired Byrne’s ambitious design for the show, where the musicians were in constant motion and every song offered something different, whether it was new choreography or a lighting effect. That bare silver box contained endless possibilities.

The crowd, initially seated except for a few brave souls, quickly got to its feet and stayed there dancing more or less for the entire show. Digging into the Talking Heads back catalog, Byrne skipped over some of the band’s best known songs (no “Psycho Killer" or “Take Me To The River”) for more groove-driven jams like “I Zimbra,” “Blind” and “The Great Curve,” the last of them featuring a scorching guitar solo by Milwaukee’s Angie Swan. “Once in a Lifetime” did make the cut, and seeing Byrne reeling around from the stage from imaginary blows, like he did in the song’s video, was the evening’s one nod to unabashed nostalgia.

The show was mostly joyful, big smiles on the faces of Byrne and his cohorts as they danced and marched. I’m sure I’m not the only audience member whose face hurt afterward. But perhaps the most powerful moment was a turn toward anger and sorrow.

The band closed the second encore with a cover of Janelle Monae’s “Hell You Talmbout,” 2015’s #BlackLivesMatter protest song in which the names of African-Americans killed — Eric Garner, Michael Brown, Emmett Till — are chanted over a furious drumbeat and the refrain “Say his name!” Byrne updated the song with names of others killed since the song was released, including that of Tony Robinson, the Madison teen killed by a police officer in 2015.

The song played like a final call to action, for the audience to take the creative energy we had absorbed together and put it toward positive change.