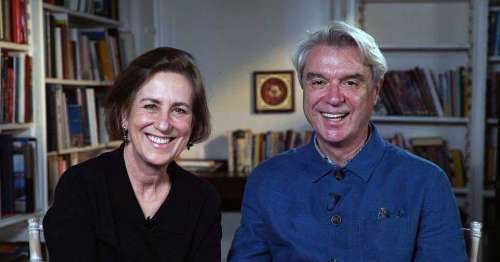 David Byrne, who began his American Utopia arena tour of the UK and Ireland at the First Direct Arena in Leeds last night, was a guest on BBC Newsnight on BBC Two last Friday. He spoke with Kirsty Wark about the American Utopia album and tour, the forthcoming release of the complete True Stories soundtrack ("the soundtrack to me is as I imagined it in my dreams"), and his work with St. Vincent and his collaboration with Fatboy Slim on the musical Here Lies Love. You can watch the interview below.

"We owe it to an audience to give them something more than just get up there and regurgitate the songs," Byrne tells Wark of the American Utopia tour. And of the album track "Everybody's Coming To My House," he says: "It's a kind of welcoming song—about inclusiveness, welcoming people in—and it seem like a time when that kind of inclusiveness instead of division is something that's kind of needed. We kind of represent that onstage by the sheer diversity and size of the band. We're a small town, a small community on our own."

And of his work with other artists, he says: "I love collaborating ... It gets me out of myself. It lets me see how another person works. It's a challenge. And sometime when it really works, one plus one equals three, you really get something better than the sum of its parts. You end up with something you never would have come up with on your own."

He also strongly encourages voters in the United States to turn out for the upcoming midterm elections on November 6!

The American Utopia tour continues at Hydro in Glasgow tonight. For details and tickets, see below or visit nonesuch.com/on-tour. "Byrne’s brilliant and endlessly inventive current live show certainly indicates an artist at the peak of his creative powers as he enters his fifth decade in music," said the Yorkshire Evening Post of last night's tour-launching performance in Leeds. "Byrne and his exceptional cast of collaborators are surely redefining the possibilities of what an arena concert can be. And we are all the better for that."