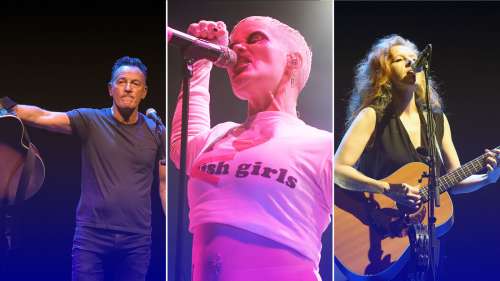 As we wind down 2018, our best-of coverage continues with the following question:

What was the best live show you saw this year?

When David Byrne billed the American Utopia tour as “the most ambitious show I’ve done since the shows that were filmed for Stop Making Sense,” it came off a little hyperbolic. Six months after catching the tour’s Chicago stop, I think he might’ve been underselling it. Barefoot and clad in matching gray suits, Byrne and band worked through a set that ran from Talking Heads’ Fear Of Music all the way up to his 2018 solo release, a sometimes turgid recording whose songs found new degrees of energy and movement when played by a band whose members were all strapped to their instruments. The performance struck that very David Byrne balance between de-emphasizing elements that might distract from the music (three long curtains of what appeared to be chain mail accounting for all the set dressing) and constantly saying “Hey, look at this cool thing we did!” (again, those curtains, which factored heavily into the choreography and provided the backdrop for some incredible, “What A Day That Was”-style giant silhouettes). I went into the night expecting to see one of my favorite musicians (and the driving force behind my favorite band) put on a show that would maybe, just maybe, live up to one of my favorite movies. I left having cried every last tear in my body, and with the conviction that I need to get a tattoo of the “This Must Be The Place (Naive Melody)” lamp.