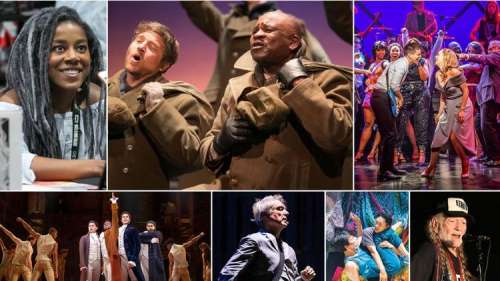 It was a year when a small Broadway musical — you know, “Hamilton” — found its way to a San Diego stage. A year when a San Diego author’s debut novel landed on the New York Times best-seller list — and stayed there for 10 months. A year when David Byrne and his band performed a concert that was, in a word, dazzling. It was a big year with many memorable moments. Here are 18 of our favorites.

Memorable concerts occur nightly around the world. Not so, game-changing ones that repeatedly take your breath away and elevate the concert-going experience altogether. So kudos to former Talking Heads’ leader David Byrne, whose international “American Utopia Tour” included two San Diego Civic Theatre concerts in April. He and his remarkably well-honed, 11-piece band performed in constantly changing configurations, with their instruments held aloft on straps or body harnesses. A silver chain mesh curtain served as the backdrop at the rear and both sides of the barren stage, which did not contain a single amplifier, mic stand or electronic cable. Seemingly every note played and sung was matched by a corresponding series of motions. The dazzling results set a heady new standard — visually and sonically — that should stand for years to come. (George Varga)