I visited New Brunswick, New Jersey yesterday to be photographed with the Color Guard team Black Watch for a magazine feature on our Contemporary Color project. This middle school gym is not where the team usually rehearses; it was strangely moody and austere—but fine for the photo session. Dev Hynes is doing the music for this team’s performance, which is exciting. 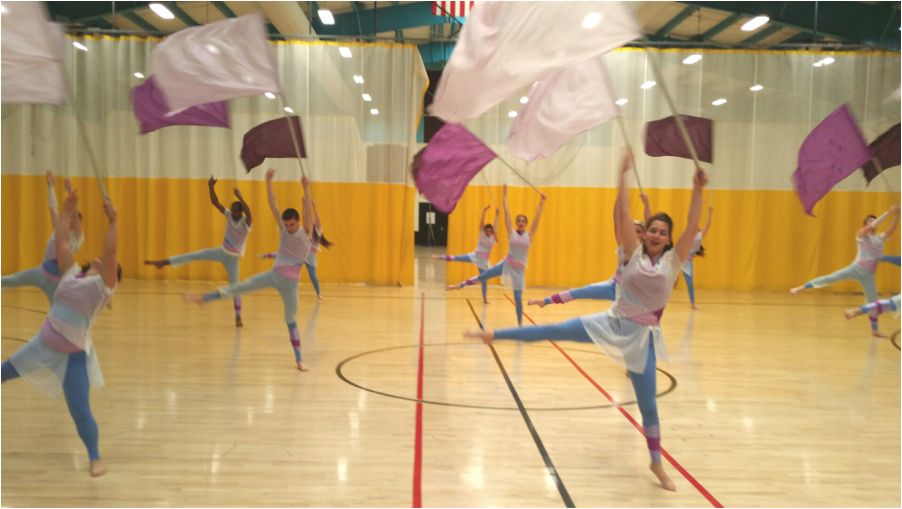 This is the phase of the project when the musical artists are submitting demos (sometimes more than demos—some of the songs sound ready to go!) of the compositions they’ve created specifically for their teams. (I have no doubt the songs will appear elsewhere later.)

Kelis and Dave Sitek posted their new song, “Something Beautiful”, for their team, Brigadiers, late Friday night. Sorry, we can’t post these for your listening pleasure. They’re all new works in progress and now the real collaboration process kicks in: teams will be giving the musical artists feedback and maybe some adjustments will be made—on both sides. Nerves and egos might kick in too—but so far its been fine.

Last week, Christian, the director of Brigadiers, Kelis, and myself talked through the new song. Though Brigadiers’ original music has a different energy and vibe, Kelis’ new song is the same tempo and length. Christian seemed quite pleased.

I submitted my own song to the team Les Eclipses in Montreal a couple of weeks ago and we’re scheduled to discuss it at length tomorrow evening. I matched the length of their program exactly, but the tempo is not exactly the same as what they were using—but even so, syncing my song with their rehearsal on video, it seems to work incredibly well. Whew. Possibly more adjustments coming… we’ll see.

Nelly Furtado was the first to deliver a song to her team—way ahead of everyone else. She’s working on a new record, which explains how quickly her song was delivered. Her team, Ventures, is so excited they are creating a completely new program to fit her song!

I’m listening to St Vincent’s submitted music now. Not so surprisingly, it seems perfect for the theme that Field of View has for their program this year—“Lunatic.” As one might expect from Annie, this is not a raging lunatic, but a quiet one.

Tune-Yards was with us in Dayton, and she has jumped into the deep end with her collaboration with Emanon. They’re in constant communication and tweaking their work to make it fit better. What I hear sounds perfect for their theme which involves a lot of robotic movement… and face paint.

Lucius’ wonderful new song for their team, Shenendehowa, sounds quite a bit different than the Bernard Herrmann themes the team originally used in their Hitchcock-themed program, but this takes it to another level… it sounds like a new direction for the group.

Adam and Mark also delivered music to their team, Somerville—along with a nifty tempo map. Joe, the Somerville director replied within minutes of Mark sending the track over: “This is awesome! Very cool! I'm excited to start working on this!”

Nico and Ira are putting the final touches on their piece this week—am very interested to see how the interviews with Alter Ego will be used! How To Dress Well’s piece is also coming along well—Tom had an excellent idea for his piece that requires some additional production, but he played a framework for the song with his team, Mechanicsburg, last week in Dayton. Dev and the Black Watch designer, JC, are also working together to get that song wrapped up soon, too!

More songs are coming in every day, which is exciting as this thing get more and more real. This, it has to be said, is the most delicate part of the process—where one’s work joins with someone else’s and it begins to become that third thing. The artists have poured their hearts and time into creating something new, and pushing the baby out into the world can be a fraught moment. At the same time, the teams have rehearsed and practiced their programs for months, so there might be a little inertia there. We’ll see. So far, so good.

See you all there in June.