In connection with the Dutch release of my book, How Music Works, and the Dance music festival in Amsterdam (which is about electronic dance music, not choreography), I did a discussion about the impact of streaming music with Michel Lambot, one of the founders of PIAS (a consortium that helps distribute a lot of indie labels in Europe, as well as providing a lot of services for artists). It was presented by the John Adams Institute (named after the president, not the composer). Dan Hassler-Forest, who teaches at the local University of Amsterdam, was the moderator. As you can see it’s been a while since this talk happened; I wanted to do some further research and fact checking before posting this.

I began by presenting my personal take on the likely financial future faced by musical artists (as composers and musicians are referred to in the business). I’m concerned that as streaming and subscription models become the dominant way we consume music (not just music, but soon all movies, books, television, video games, journalism—almost any creative content you can name), the amount of income from those services that trickles down to the content creators might not be enough for them to live on. The knock on effect as revenue sources from ye olde media sources dries up will be considerable. Content creators will be forced to seek other avenues for their income beyond that derived from their recordings, books, movies, you name it. More on those avenues of potential income later… as it’s already happening.

I’ve written on this before. But this time I came armed with some new data, and I wanted to hear Michel’s POV—which it turns out is fairly different than mine. I have a narrow focus on this and I’m fairly skeptical of techno utopianism, so any balance from Michel would be welcome. This event wasn’t framed as a debate, but rather a talk about what is happening and the possible or probable consequences—from slightly different, though not opposing, points of view.

Here’s the first slide from my side of the conversation: it shows how, as of 2013 in the U.S., all other forms of music consumption except streaming are down. Streaming is up 42%, CDs are down 16% and (legal, paid for) downloads are down 11.6 % as of last July (Source: Nielsen sound scan via Digital Music News). The writing, it would seem, is on the wall. 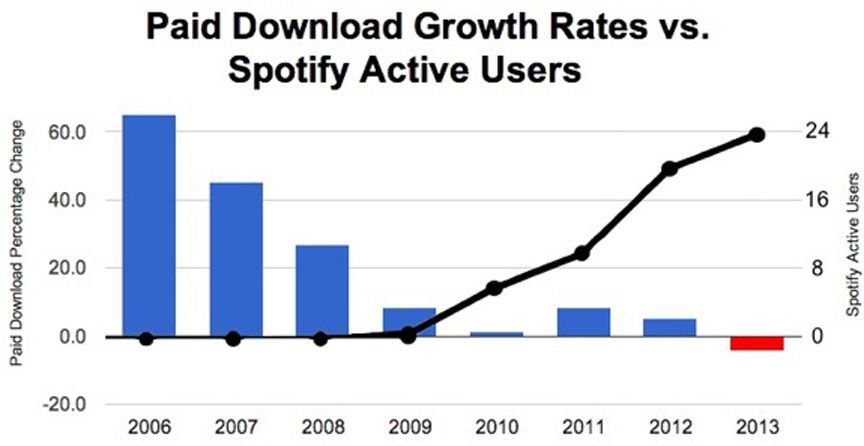 In Sweden—the country where Spotify originated—95% of listeners now get their music via that app. It is not that high yet in the U.S., and, in the U.S. there are other competing services (Beats, Amazon Prime, Apple, You Tube and more are on the way). In the U.S., most—about 75%—of Spotify users don’t pay anything for the service or for the music they get. They put up with the ads that are supposed to cover the licensing fees and money paid to the artists and writers. For these listeners, music is—as far as they are concerned—“free.”

From the NY Times:

“The service, which started in Sweden in 2008 and is now available in 55 markets around the world, has not updated its customer numbers since March 2013, when it reported 24 million users. Six million of those pay.”

Responding to this “free” model was part of the origin story of Spotify. In Sweden, illegal downloads of music were decimating their music industry at an increasing rate, so when Daniel Ek came up with a legal version of free music that would channel some money to the labels, the labels were thrilled.

However, the income from streaming is much lower than from previous ways of consuming music. Also from the NY Times, “In 2012, streaming services and satellite radio in the United States contributed just over $1 billion in revenue to the recording industry, a 59 percent increase from the year before. Still, those numbers are small compared with the $5.6 billion from downloads and physical sales, according to figures from the Recording Industry Association of America.”

This is from 2012, but you can extrapolate and imagine where things are now two years later, based on the graph. The income from downloads and physical sales will, if the graph continues its trajectory, shrink almost to nothing, and the streaming income will rise—but not to anywhere near the $5.6 billion from downloads and sales.

Maybe in some ways this is fair. I will grant that the recording industry was bloated, especially during the CD era. Tales of excess were rampant and common. CDs were way, way overpriced… and consumers sensed that they were being gouged. So they didn’t feel all that bad when illegal sites like Napster and Pirate Bay offered music for free. Consumers justified freeloading by saying they weren’t robbing the artists (who they said were being cheated anyway), but were cheating the evil record companies.

That reaction was unfortunate—especially for musicians. I accept that a serious price adjustment was in order, and lowered income might be acceptable for many of us—but maybe not as low as zero. Which is partly why streaming was so acceptable to artists and labels in Sweden—home of Pirate Bay. Anything was better than nothing, which is where things were heading. If you are falling you’ll pretty much grab anything and be thankful for it.

Recently, there has been a pretty big blowback in reaction to the miniscule income from streaming from a number of artists, myself included. We skeptics wonder how artists—especially emerging artists—are supposed to make a living off their recordings in the future if this emerges as the only way folks consume music (especially if most folks who use the service aren’t even paying for the subscriptions!). Our a priori assumption might be incorrect. We might be making a mistake in presuming that we will be even making recordings in the future, but bear with me.

Artists and songwriters were a little slow to analyze streaming income, as first it may have been viewed as a small but nice additional income source. But now, as the cute new source of income has grown to be an omnivorous giant, the picture looks very different.

Even Taylor Swift isn’t allowing Spotify to have access to her new record! (Sadly, a lot of the coverage of her decision avoided the big issue, and painted this as a ploy by a popular artist to force her fans to pay, simply because she can. What they failed to mention is that she can because she’s not signed to one of the big labels.) She did actually ask Spotify to take her new album on a subscription (not free) basis, but they refused. So, this is not just about some grumpy old pop stars longing for the good old days; young and even successful artists are questioning this model, too. As a partial response to all this backlash, the folks of Spotify posted a graph on their website in December of 2013 that showed what artists of differing levels of success could expect to earn from their service. They picked a month, presumably at random, and showed what income various recordings might generate.

This graph gave me an idea. If I could get the streaming income figures for one of my own albums—let’s say a Talking Heads album, as those are still of interest and might get streamed more than some of my current work—then I might compare what I get from Spotify to what they claim I should be getting. Optimistically, they’d be right and I would revise my outlook accordingly. Let’s see how it looks.

I had previously asked for, and seen, some of my own Spotify data that gets sent to Warner Bros records (who control the Talking Heads recordings), but I found the data to be impenetrable; it’s totally impossible to understand—possibly intentionally but certainly conveniently so. What one as an artist wants to know is simple—for example, how much streaming revenue did record X generate over a given time period and how many streams did it take to generate that income. However, there are so many sliding scales (free listening doesn’t pay as much as subscription listening, for example) and contingencies involved that affect the calculations that getting a simple answer is all but impossible.

This audit/investigation happened about a year ago, and I began to wonder if artists are getting into a situation where the income due to them is effectively hidden. Okay, maybe not hidden, but so hard to figure out that it is all but impossible to determine. That’s as bad as the bad old days of simply getting cheated.

Given this complexity and opaqueness, I then wondered if it would be at all possible to limit my inquiry and find out what just one or two quite successful TH records generated, for the exact same month Spotify used as an example in their graph? Could I see if their estimate of what TH should be earning is accurate or not (presuming, of course, a TH record fits one of their categories)? The only way to do that would be to crunch the mass of inscrutable figures and see if one could simplify it—following their format and for the exact same time period.

As luck would have it, around this time my business managers were doing one of their periodic audits of Warner Bros. accounts. These audits are not litigious, aggressive or adversarial—Warner doesn’t dispute them usually. It’s part of doing business. But even so, the audits usually do turn up enough unpaid income to justify the costs of the audit and the accounting. You can see that there is a gamble involved. An emerging band would not be able to take the risk of auditing their company, as the amounts they might uncover wouldn’t likely be high enough to pay for the cost of the search.

My manager, David Whitehead, wonders, “As for traditional artist protections, can you imagine trying to audit streaming? What good will contractual audit rights will be?”

Anyway, I suggested that while they were digging, the Warner folks and my own business folks might try and simplify the streaming income data, maybe even going so far as to try and fit my income figures into the same dates and format as the Spotify graph—in order to make a fair comparison. That initial request to Warner was made just over six months ago. The figures (in the appropriate format) came in a few weeks before my talk with Michel and here are the results. On the left are amounts Spotify estimated one might receive from a Niche Indie LP in one month and also from a Classic Rock LP. I picked two Talking Heads LPs that I felt might fall into those same categories. 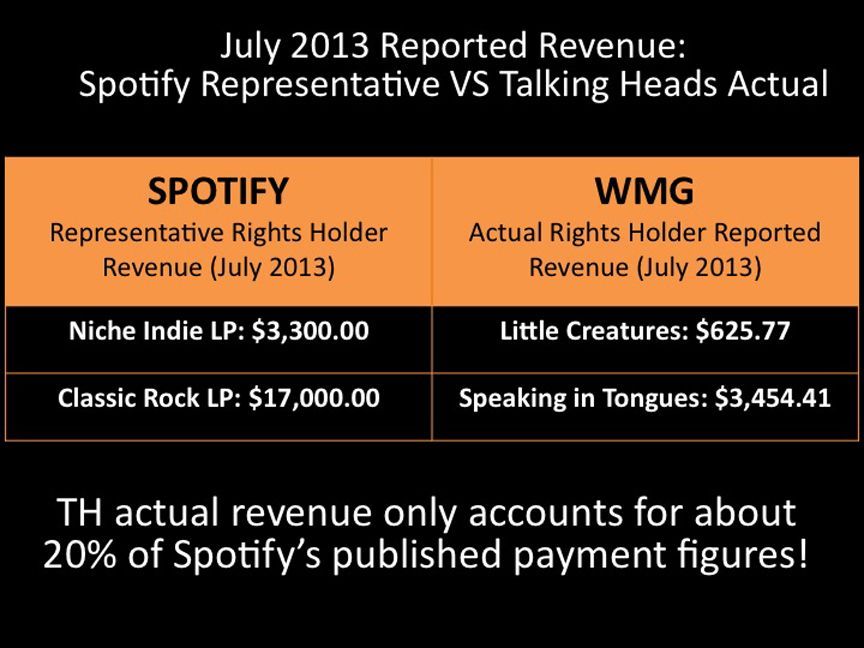