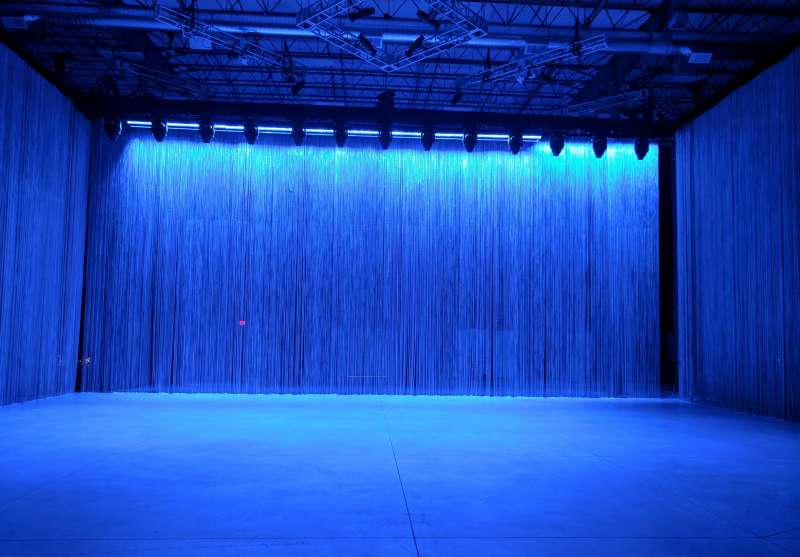 Quite a few months ago I went to Lititz and Manheim, P.A. to test out some tech for my upcoming music tour. Dates are announced today HERE. 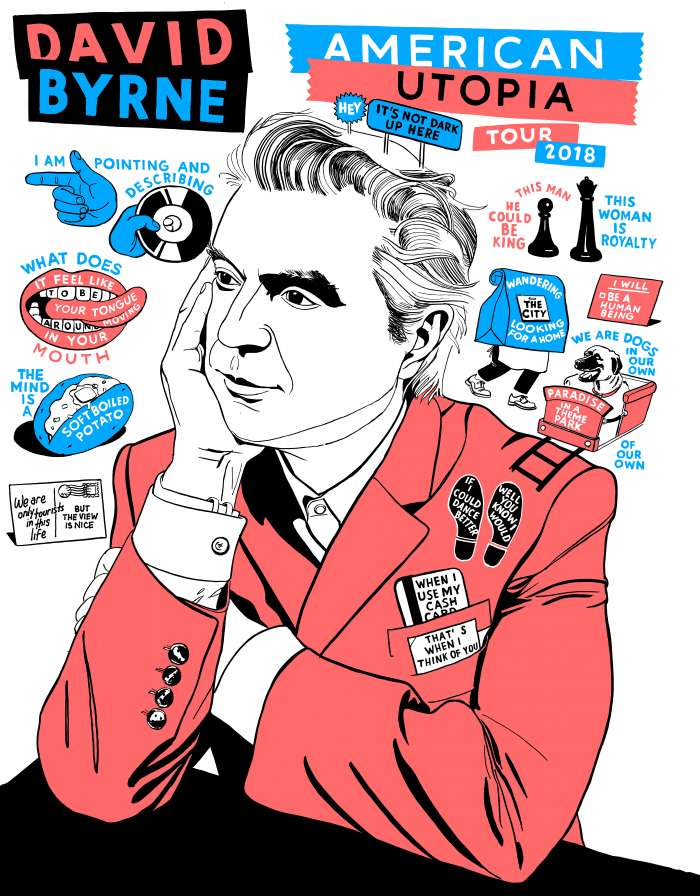 I previously wrote about the strange story regarding how these tiny towns in the middle of Amish farm country became hubs for concert technology. I went there so we could set up a version of what I envision for the show and see if it it works, and if it didn’t work, I’d have to go back to the conceptual drawing board. So, stage tech geekery alert.

The show concept is simple. Like the concept behind the show that was filmed for Stop Making Sense, the idea is super obvious and easy to describe. In that show, it was “bit by bit show what goes into making a show, and then activate it”. In this one, it is “allow everyone to be mobile on an empty stage” (and imagine what that allows).

The idea came from two places, my previous tour with St. Vincent, in which the brass players were all mobile… 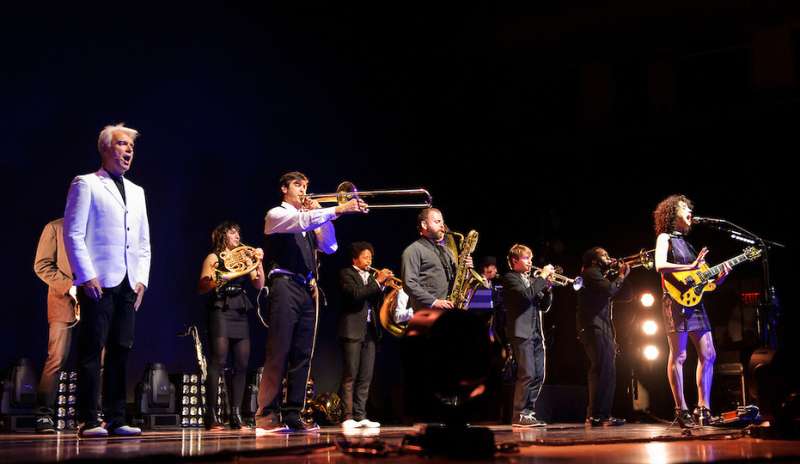 …and from encouragement from my tour booking agent who pointed out the impact that people on stage had on my previous shows as opposed to screens and technology. I decided to take the mobile brass player idea further, and I asked if every musician—drums, keyboards, singers, everyone—could now be mobile. Guitars and singers no problem, we can have them be wireless with their amps and all that off-stage, but keyboards and drums? How does one do that?

With smart musicians, wireless technology, and harnesses. Keyboard midi signals can now be transmitted so we’d need to test that. Drums and percussion—there are a lot of grooves in my music, in Talking Heads songs and in some new songs as well—so we’d need to figure how to make that happen. I thought of marching bands (I worked with one from Brooklyn at Carnegie Hall recently) and New Orleans second line bands, and Brazilian samba schools… all of which make mighty grooves and are mobile. 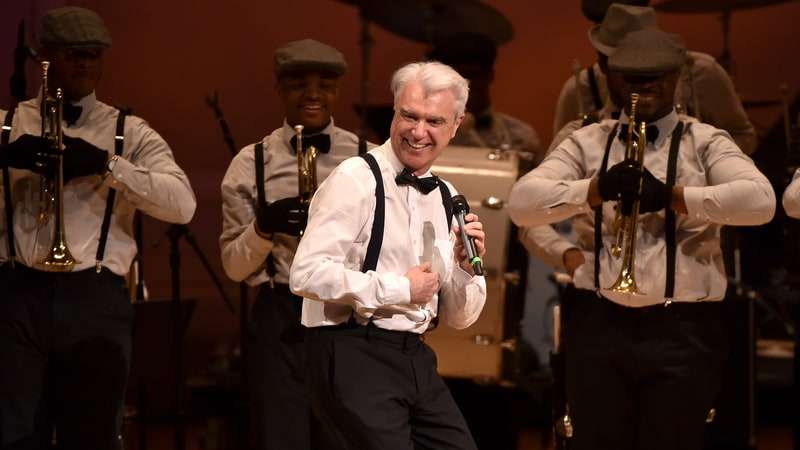 I talked to Mauro Refosco, a percussist I often work with, and we figured out how to musically divide the parts amongst a number of players; 6, to be exact.

So, back to Pennsylvania. It seemed musically this could work! So that meant the stage could be empty. Really empty. No monitor speakers, lights or risers. How to make that emptiness be clean? We don’t want to see the road cases piled in the back, or the monitor mixer over on the side or the stage hands off-stage either. A curtain could block all that off, but at outdoor gigs even a little wind would blow a curtain and be problematic. It was brought to my attention that in Vegas and some other places they use a lightweight chain as a kind of curtain. 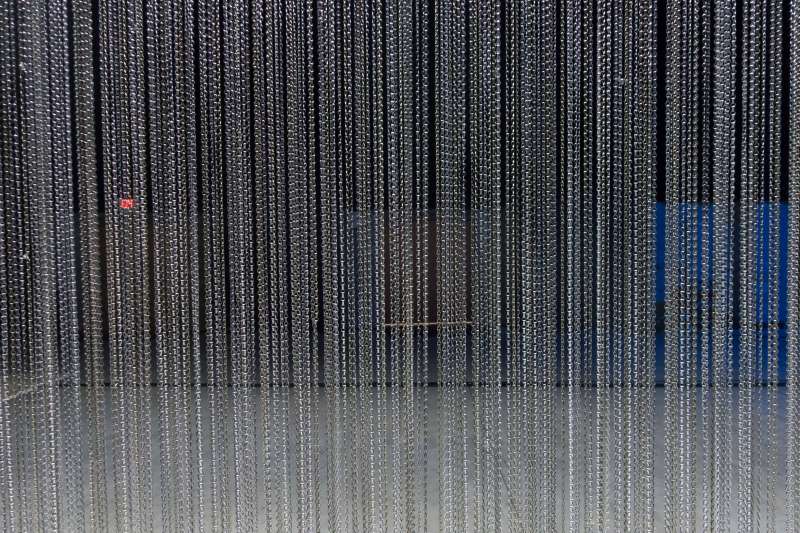 But could a chain look semi-opaque? We had to light it to see. My lighting designer Rob Sinclair and Lighting Director Douglas Green were on hand. The answer was yes… it looks amazing. 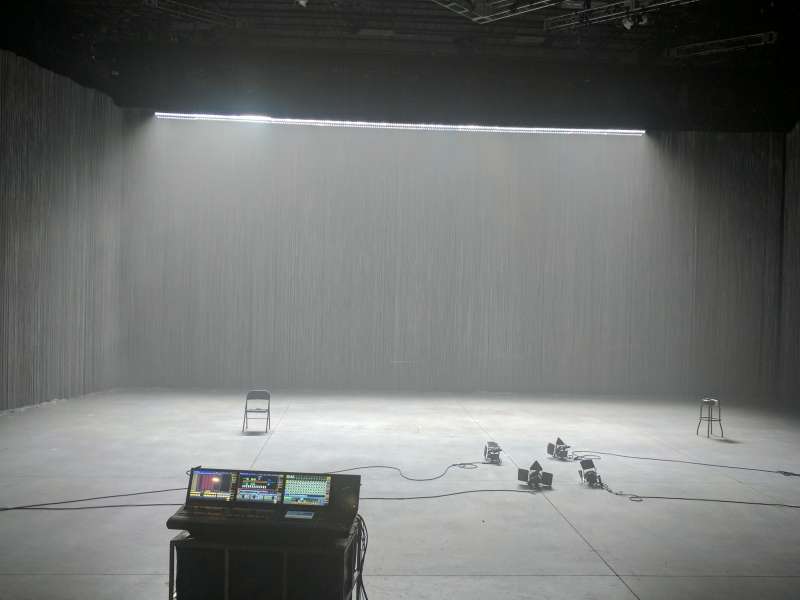 More questions remained. Would the wireless signals from the mics and instruments go through the chain? Or bounce off? They pass right through, whew.

Can the offstage crew see what’s going on ? Yes—the chain curtain appears partly transparent from behind. The crew can see in but the audience can’t see them.

Can one cast shadows on the chain? Yes! 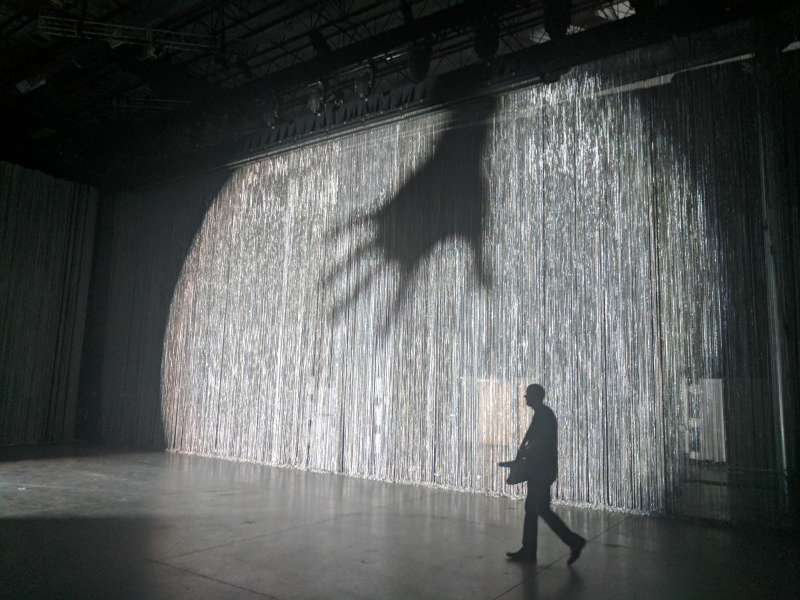 Can we get lots of looks? Yes. I won’t detail them all, but it’s pretty magical. 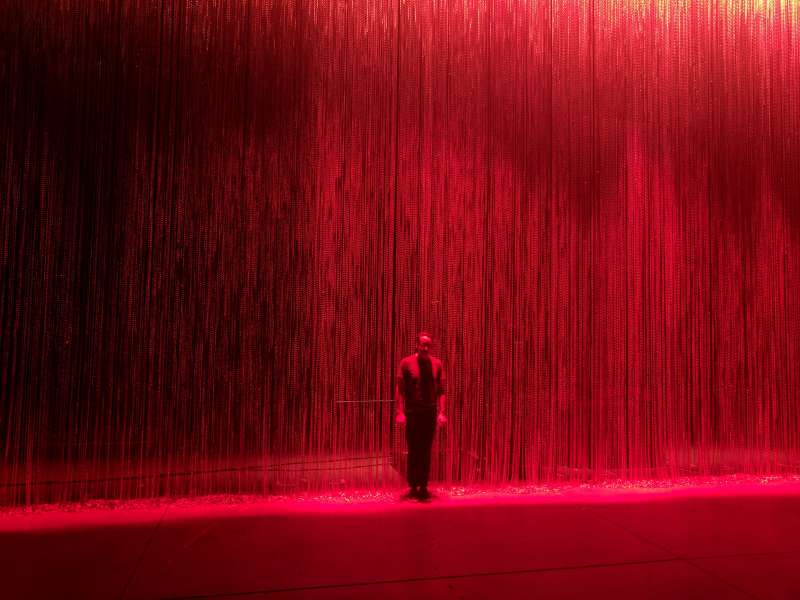 Now, we were also testing something else. A technology called BlackTrax that allows the moving lights in the truss/grid to follow and track the performers. Big acts have their own follow spot operators—people, sometimes lots of them, who point the spotlights at the star and know when they will move and where. I can’t do that. But now there is this technology that makes it feasible and maybe even improves on it.

The performers wear tiny infrared tracking lights, invisible to themselves and to the audience, that are able to be seen by trackers up above in the truss. The operator can then instruct the lights to follow a performer or any number of things.

One can assign all the lights to move in parallel, following one performer.

A light can follow a performer while casting a shadow.
And one of my favorites, which I doubt we’ll use as it might be too silly, is an offset. The light is told to stay a couple of meters away from the performer. So the gag is that the desperate performer can never get into his light… it’s always just a few steps away.

There are many many more. Some we will use and some are fun but not for this show… more to come.