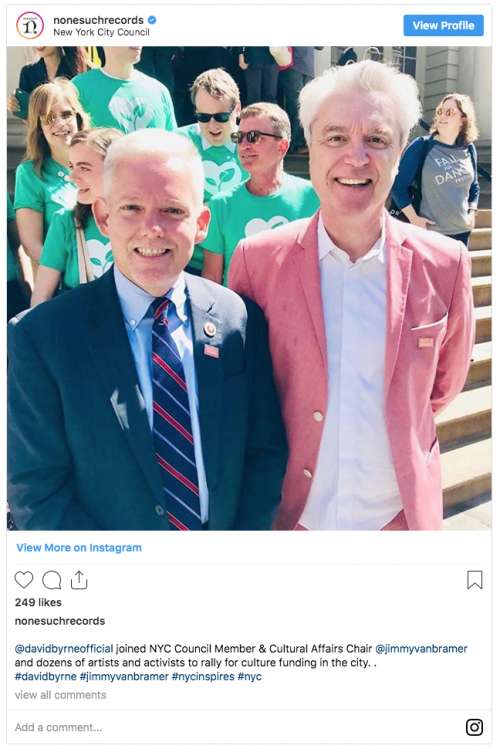 Alongside his musical career both as a solo artist and a member of Talking Heads, David Byrne has been promoting civic engagement too, whether through writing essays about democracy, inviting voting advocates HeadCount to set up booths at his American Utopia tour, participating in the Women’s March, and more. Most recently, he spoke at an NYC rally to support increased public funding for the arts on Tuesday (5/21) on the steps of City Hall, appearing with Council Member & Cultural Affairs Chair Jimmy Van Bramer, Brooklyn Children’s Museum CEO Stephanie Wilchfort, Council Members Robert E. Cornegy, Jr, Laurie Cumbo, and others.

NYC Patch reports that Byrne called for action from Mayor Bill de Blasio, saying, “culture helps your whole city, your whole community, even if you don’t partake in it.”

De Blasio’s executive budget for the 2020 fiscal year inclues about $133 million in city funding for cultural programs and institutions, according to a City Council briefing paper. That’s more than $59 million less than the roughly $192.8 million included in last year’s adopted budget.

The cuts would hurt organizations that often struggle to stay afloat despite contributing to an industry that contributes to the city’s economy, advocates and Council members said.

Byrne argued that cultural institutions lift up communities across the city, saying that research has linked their presence to lower crime and obesity rates and higher test scores.

Perhaps what this movement really needs to get de Blasio’s attention is a ska band?

See a few pictures from Tuesday’s rally below.

Meanwhile, Byrne’s American Utopia is headed to Broadway for a run at the Hudson Theatre from October 4, 2019 – January 20, 2020. Tickets are on sale now.