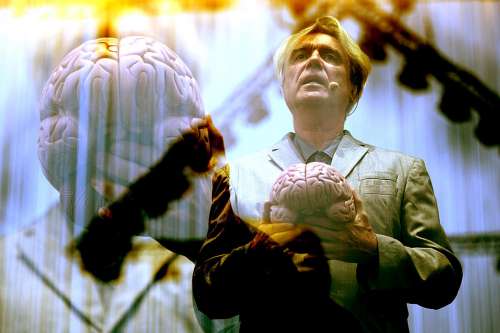 David Byrne announced that his acclaimed American Utopia live show would be adapted for a Broadway run later this year. The performances will take place in the 1,500-capacity Hudson Theatre for 16 weeks, from Oct. 4 to Jan. 19.

The former Talking Heads frontman noted that “extra elements and nuance” would be added to the show.

“As I was recording the songs for my American Utopia album, it occurred to me that they would be exciting to play live – and I realized that a lot of my older material would fit right in,” Byrne wrote on his website. “I imagined a live show. … I pictured a lot of drummers, a kind of drum line/samba school/second line – that would create the rhythms. I had this vision of how exciting that would be – both for me and for an audience.

“I also realized that what creates the biggest impact on an audience is performers. By that, I mean we might go 'ooh' and 'ahh' at pyrotechnics and wild video projections, but it’s the people on stage that interest and move us the most. The human connection, I realized, carries more weight and emotion than all the gadgets in the world. If I could foreground the performers, I might connect in a visceral and exciting way.”

Byrne went on to outline how the solving of each performance problem opened up new opportunities until “I realized we were doing something no one had ever done before, or if they had, I didn’t know about it. When we began to put the show in front of audiences, I realized there was a kind of narrative there. Friends, and even strangers, began to point it out, and we all sensed it, as well. As a friend from London said, ‘The American Utopia of the title is there onstage.’ I also realized that this narrative was not something told, it was something experienced.”

He recalled that people started suggesting that the show would work well on Broadway, leading him to consider that, in that environment, he could “perfect the sound, the lights, the movement – we don’t have to adapt to a new place every night!”

Noting that a theater audience would have “slightly different expectations,” he looked forward to the prospect of “audience members who don’t know me or my music – which for me is exciting. “I thought to myself that this new context might be good – it might actually help to bring out the narrative arc a little bit more, to make it just a little more explicit,” he said.

“I asked Alex Timbers, whom I’d worked with twice before on musicals, to help. He brought some original and insightful ideas to the room, ideas I was too close to imagine, and we used those to build on what we had, to add some extra elements and nuance, while keeping what is integral to the show.”

Still, Byrne refused to discuss what he believed the American Utopia show was about. “I won’t say — that’s like putting the nose on the clown — but I will say the title is not ironic,” he said.