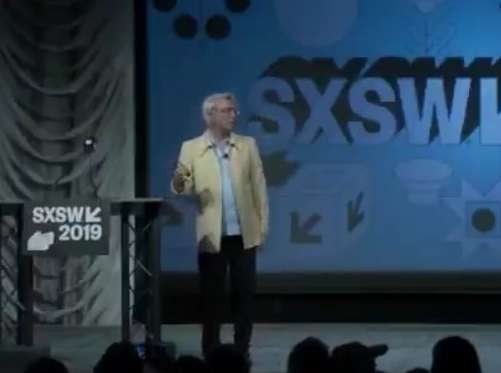 Raise your hand if you read the news in the morning and end up feeling angry, depressed and frustrated the rest of the day.

This happened to David Byrne – too often. So, in 2016 he decided to start a file.

“Occasionally I’d read something that seemed hopeful and encouraging,” the Grammy, Golden Globe, and Academy-award winning musician told a packed hall at Reasons To Be Cheerful with David Byrne, presented at South by Southwest Conference and Festivals (SXSW) 2019 in Austin. So, Byrne would clip the good news and put it in a file folder.

That folder full of clippings was not only a personal reminder of life’s goodness, it was the inspiration for a multimedia project Byrne launched in 2018 titled “Reasons To Be Cheerful” (named after an Ian Dury song). On the project’s website, people can read about and share good news “as a kind of therapy” to counterbalance the harsh news of the world.

“Reasons To Be Cheerful” shares the kind of news that nonprofit professionals can read to stay motivated, to get ideas and to be inspired by what their colleagues are doing to improve the world. In fact, Byrne encourages imitation: “if it works, copy it.”

Dynamically flitting about the stage, Byrne described a number of uplifting examples including in Medellín, Colombia where the addition of a library in a poor barrio improved the whole neighborhood. Byrne cited a study done recently by the University of Pennsylvania demonstrating that when libraries and cultural institutions are added to such urban areas, some of the good things that happen include: children’s test scores go up, spousal abuse goes down, obesity goes down and the crime rate goes down.

He also gave a shout-out to a Central Texas energy project. Georgetown, one of Texas’s most conservative suburbs, has worked to make all its electricity come from renewable sources.

At the end of the presentation, Byrne took audience questions. One device-submitted question asked: “does music still inspire you?”