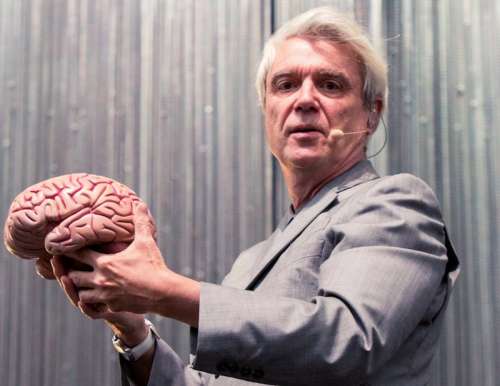 David Byrne has always had more than a bit of the theatrical in him, what with his highly choreographed live shows. Which is just to say his next move makes a lot of sense: The iconic musician has announced he’s bringing his American Utopia show to Broadway later this year for a strictly limited engagement.

The show, which features an entirely mobile band, sold out concerts around the world last year. The performances mixed songs from the No. 1 charting album American Utopia with more of Byrne’s classic solo tracks and Talking Heads material. Now, Byrne has gathered the team behind the tour to prefect the intricate stage design and movements for the Broadway stage. The design team is made up of Rob Sinclair (lighting), Pete Keppler (sound), Karl Mansfield (Musical Director), Alex Timbers (Production Consultant), and Annie-B Parso (Choreography and Musical Staging).

David Byrne’s American Utopia will run from October 20th, 2019 through January 19th, 2020 at the Hudson Theatre. Previews will begin October 4th. Prior to lighting up Broadway, the production will be staged at Boston’s Emerson Colonial Theatre for an 18-performance run from September 11th through September 28th.

In an essay about bringing American Utopia to Broadway, Byrne wrote,

“Because of how theatrical the show is, others started telling me ‘this needs to go to Broadway.’ Why not? But what did that mean? Parked in a beautiful Broadway theater we can perfect the sound, the lights, the movement. I thought to myself that this new context might be good- it might bring out the narrative arc a little bit more, to make it just a little more explicit. I asked Alex Timbers, whom I’d worked with twice before on musicals, to help. He brought some original and insightful ideas to the room, ideas I was too close to imagine, and we used those to build on what we had.”

During a recent visit to This Must Be the Gig, Byrne discussed the genesis of his American Utopia tour and its elaborate stage design. Listen below.