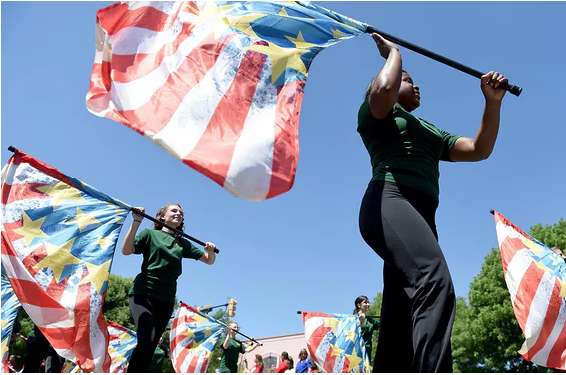 When David Byrne calls you to ask a favour, promising that, “you’ll never do anything like this again,” it’s hard to say no. That’s how the legendary former Talking Heads frontman convinced Ad-Rock of the Beastie Boys, Money Mark, Nelly Furtado, St Vincent, Tune-Yards, Zola Jesus and more to create music to accompany a live colour guard performance.

For the uninitiated, colour guard (sometimes known as flag spinning) feels like a hybrid of the high school marching band and rhythmic gymnastics, with synchronised spinning props, and elaborate choreography set to musical montages. “The call it the sport of the arts,” explains David Byrne in an interview with the Guardian.

Colour guard is rooted in the military tradition of marching with flags, rifles and sabres, a connection that Byrne shrugs off with the words: “Ballet came out of a military tradition, too. Wikipedia it.” Byrne discovered colour guard accidentally, when a high school colour guard team asked if they could use a piece of his music for one of their routines. “They used an instrumental piece I had done for a Robert Wilson theatre thing decades ago and I thought, ‘In what high school are they listening to this?’”

Byrne said yes, the school sent him a DVD of their performance and he was hooked. He started attending colour guard competitions and while he watched the mesmerising, elaborate performances, he became inspired. “I stumbled on it and thought it was an incredible thing that was under the radar,” said Byrne. As he went deeper into the world of colour guard, he started to wonder about adding live music to the mix. “I thought what if we do it with 10 really interesting live musicians?” said Byrne. “To me that is the most obvious, simple thing in the world. Ten teams, 10 musical acts, each with a song or piece of music for their colour guard team.”

This summer, Byrne is bringing his vision to life. Colour guard is coming to New York and Toronto in a show called Contemporary Color, co-commissioned by the Brooklyn Academy of Music and Toronto’s Luminato Festival. As Byrne envisioned, the show pairs 10 teenage colour guard teams from Canada and the United States with live music from artists including Devonté Hynes, How to Dress Well, Lucius and Nelly Furtado. The composer Nico Muhly will collaborate withIra Glass, the host of This American Life, for a piece, and Byrne himself will contribute an original number.

While many of the musicians operate on music’s left field, colour guard still managed to startle them. “It’s a constant surprise what these kids and their designers and directors will come up with – sometimes a slightly head-scratching surprise. There was a Canadian team that did a very serious tribute to [US ambassador to Japan] Caroline Kennedy,” says Byrne. “It was really good! They used the Neil Diamond song Sweet Caroline, but you wonder whatever possessed them to do that? They’re Canadian!”

Lucius’s team is taking inspiration for their routine from the films of Alfred Hitchcock. “They do a re-enactment of the shower scene [from Psycho] and The Birds on the jungle gym,” said Byrne, laughing as he added, “You wouldn’t get that at a cheer competition. You wouldn’t get that on a half-time show.”

While the themes sound outré verging on funny, colour guard is anything but silly. “They are serious, as in passionate and committed, not serious in the no-fun way,” said Byrne. “It’s really infectious. You get a taste of it in the video with Tune-Yards meeting her team. After a day of observing it, she was so into it.”

“The flag features affected me in a pretty visceral way,” explained Merrill Garbus, who performs as Tune-Yards. “It’s dozens of colourful flags being waved in a whirling choreography. There was something about humans creating moving pictures on the floor, and moving space with their formations. It’s such a breathtaking skill to be so in sync with so many other performers. I imagine you have to listen with every fibre of your body in order to do that work.”

Byrne, who has tried his hand at the so-called sport of the arts, confirms that it is indeed very challenging. “It’s really hard. And scary. If you get hit on the head with it, it hurts,” said Byrne. “The simplest things are not that easy. Even waving a flag, if you don’t do it right, it gets all bundled up instead of unfurling nicely.”

For the musicians, the big challenge was composing music to a set routine, a compromise between the two groups. “Emanon, the guard I was paired with, had an incredible show already, using a musical medley that their director, John Vega, had mashed together very skilfully,” said Garbus. “I didn’t want them to have to alter their choreography too much, so I mapped out the tempos and musical feels that they had been using, and then composed to that.”

While Garbus composed her piece from scratch, Byrne used the beginning of a song he had already started. (“As you might imagine I have the beginnings of quite a few songs around,” said Byrne.) Despite being a legend of the New York music scene, his colour guard team had no compunction about asking him to alter his art for their performance. “They came back to me and said it had to be four bars longer to match the rifle toss at the end,” said Byrne. “It’s a process. I’ll have to adjust the music a little bit, but they have to adjust a flag toss or something as well. It’s all an adjustment.”

Over the last few months, the composers and their colour guard teams have gotten used to each other. “It’s all been a pretty wonderful surprise,” said Garbus, who instantaneously felt part of the team. “The Emanon members immediately welcomed me, invited me to be backstage with them at the Winterguard International finals in Dayton, Ohio, and let me walk on to the floor with them at their final performance. Such generosity from strangers, and such an openness about collaboration. That’s rare in any performance field.”

But it’s not rare for colour guard. “They are all very supportive of one another and of the other teams,” said Byrne. “There’s no meanness in the whole thing. It’s competitive, but they all cheer one another on.”

There are hundreds of colour guard performances on YouTube, but according to Byrne, none of them capture the real essence of the sport. “There’s an electricity in the air when they do it live. It’s quite a different experience,” said Byrne, which is part of the reason he was so eager to bring colour guard out from under the radar and into the spotlight. “It’s a vernacular art form made, to some extent, by the people and for the people. It’s free from the constraints that a lot of the art forms that we know in New York are under.”

For her part, Garbus is eager to see the interaction between musician and colour guard come to life. “I love performances that are one-of-a-kind collaborations. I’m really looking forward to seeing myself and all of my music colleagues completely out of their comfort zones,” she says. “It’s nice to shake things up a bit, isn’t it?”

This piece was amended on 4 June 2015. Zola Jesus is performing instead of Kelis. Lucius’s team, not Bryne’s, will perform a Hitchcock-inspired routine.