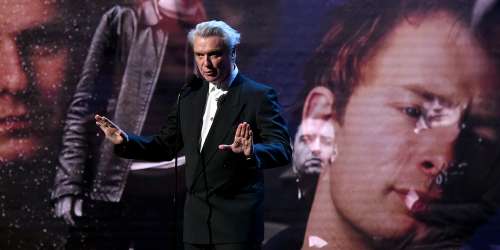 CREDIT: Jamie McCarthy/Getty Images For The Rock and Roll Hall of Fame

David Byrne gave a speech inducting Radiohead into the Rock and Roll Hall of Fame. Though the band weren’t fully present at the ceremony, with only Ed O’Brien and Phil Selway present after Thom Yorke announced earlier this year that he’d be skipping out on the ceremony, Byrne still spoke to the band’s impact on rock and roll, discussing everything from the way that they market their music to the fact that their name is based on a Talking Heads song.

“I was surprised and very flattered when Radiohead stated that they’d named themselves after a song that I had written,” Byrne said during his speech. “I did ask myself, ‘Why that song?’ I still haven’t been able to figure it out, and in a certain way I don’t want to know. This was kind of a goofy Tex-Mex song that I’d written. Maybe we’ll find out, who knows.”

Byrne also said that the “quality and constant innovation” of their music had cemented their place in the history of rock music. “They’re creative and smart in both areas [as artists and music marketers], which is a rare combination for artists—not just then or now but any time.”