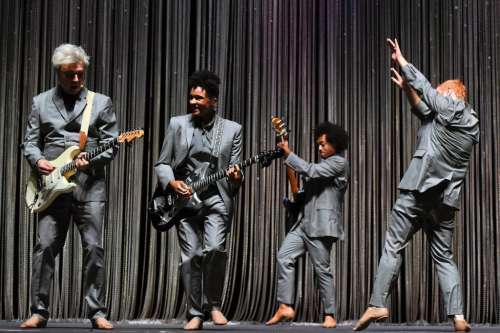 David Byrne is bringing his “American Utopia” show to Broadway.

The art-pop musician, who became famous as the lead singer of the Talking Heads, is working with the theater director Alex Timbers and the choreographer Annie-B Parson to revise the show for the stage.

The Broadway run, at the 1,050-seat Hudson Theater, is scheduled to begin performances Oct. 4, to open Oct. 20 and to close Jan. 19. It will be preceded by an 18-performance production at the Emerson Colonial Theater in Boston, from Sept. 11 to Sept. 28.

In an interview, Mr. Byrne said that Broadway “hasn’t been a driving ambition in my life,” but that from the very first iteration of the “American Utopia” tour, which began early last year in New Jersey, people had seen it as theatrical.

“My friends would talk to me about the show, and often they said, ‘David, there’s a narrative in this — you never articulate it, but we get it by osmosis from the music and what we’re seeing from the band and the choreography,’ ” he said. “I thought that was very encouraging, because what we do is more theatrical than the usual concert, and if we can bring that out a little more, it becomes something that really makes sense on Broadway.”

“American Utopia” began as an album released in March 2018, and the tour traveled to 27 countries last year. The stage show, which features a dozen musicians including Mr. Byrne, has songs from the album but also solo songs, tracks from the Talking Heads and even a Janelle Monáe song.

Mr. Byrne declined to explain “American Utopia,” saying, “I’m not going to tell you what I think it’s about. That’s for you to see. My feeling is that what it is about comes across as an experience, and you understand it viscerally.” But he did say that, for some audience members, “it tells them that something is possible in this world, and this country, that maybe they didn’t think was possible.”

He said he was looking forward to performing in a relatively small venue. “That intimacy is exciting,” he said. “You feel a connection to the audience as a group of people, as opposed to an abstract mass.”

“American Utopia” is not a play or a musical — it will be presented on Broadway as a special event. But Mr. Byrne has written two musicals — “Here Lies Love,” about Imelda Marcos, and “Joan of Arc: Into the Fire.” He said he wasn’t sure whether he would write another show, but noted that he is continuing to revise “Joan of Arc,” saying “it might have been too complicated,” and that “I still look at that to see if there’s another way to do it — more about the songs than about the intricacies of the story.” And he said there remains a possibility that “Here Lies Love” would come to Broadway: “There’s interest in bringing it back. But who knows?”