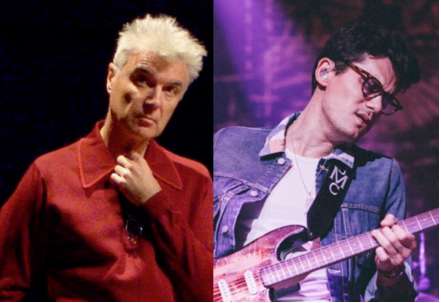 After a decade in the City of Brotherly Love, The Roots Picnic is officially expanding to the City That Never Sleeps this fall. And joining the fun this year are Talking Heads founder David Byrne and singer/songwriter John Mayer.

The long-running festival run by The Roots, held for the last nine years in the band’s hometown of Philadelphia (the latest was last Saturday, June 4th), will debut its first ever New York City edition on October 1-2 in midtown Manhattan’s Bryant Park.

The first night will feature a headlining jam with D’Angelo and Mayer, while the second night, billed as a Love Letter to NYC, will be headlined by the entire Wu-Tang Clan, Byrne and Nile Rodgers, all backed by The Roots. Also among the scheduled performers are Swizz Beatz, Kevin Gates, X Ambassadors, Trombone Shorty and EPMD. The two-day event event is being produced by Live Nation and Maverick in partnership with the Bryant Park Corporation and will be curated entirely by The Roots.

“New York is a second home to us,” Roots drummer Ahmir “Questlove” Thompson said in a recent interview. “There’s going to be pop up shops there, really good curated food, comedy, DJ parties there and acts that you wouldn’t expect… We’re deeply involved in everything, from the grass area to the food you’re gonna eat to the music you’re gonna hear in between. We’re a part of all of that.”

Renaissance man Byrne seems to be in great spirits for the collaboration, posting yesterday to his official Facebook page: 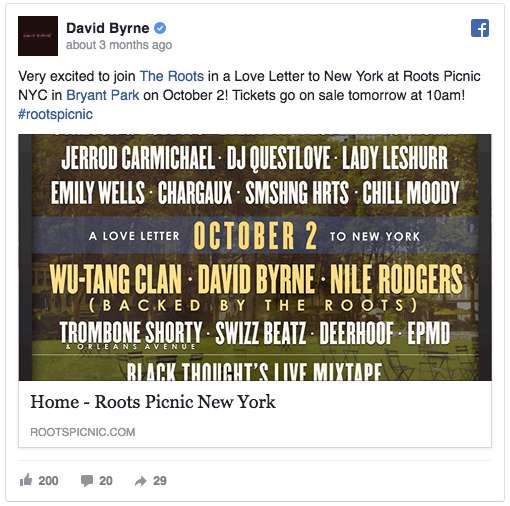 The Picnic will also be the first-ever ticketed concert event held in Bryant Park, a result of the band’s close working relationship with the Bryant Park Corporation.

Tickets went on sale today and you can buy them here.

Check out the full lineup below: