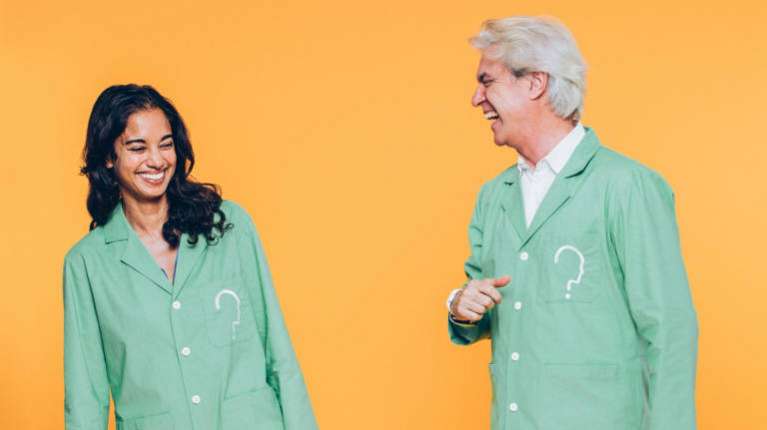 When David Byrne isn’t singing with The Roots and The Wu-Tang Clan or showing up to play with obscure cult artists, he’s busy working on other projects. One of those is about to debut in California’s Bay Area: ‘The Institute Presents: Neurosociety,’ an “immersive theatrical experience” Byrne created with help from technology investor Mala Gaonkar which features room-sized installations where visitors can undergo cognitive experiments — fun, musical, cognitive experiments:

In ‘Neurosociety,’ groups of ten visitors will be guided through four separate spaces, where they will participate in immersive theatrical demonstrations and experiments. Each interaction will reveal how the brain builds a subjective measure of the world and is fundamentally guided by pragmatic concerns anchored in personal experiences. These responses gradually reveal not only aspects of ourselves but also how we interact with others, often in counterintuitive and surprising ways. Visitors will be embodied in a doll, see their hands grow to a vast size, accurately predict election results of fictional politicians, witness moving objects freeze and discover how fair and trusting they are with others. Rather than read about cognitive behavioral science, visitors will experience it for themselves, in a visceral and entertaining way. Each room will be a stage that mirrors a strange, yet familiar, series of people and places. With the consent of participants, visitors’ reactions and decisions will be anonymized and used by the labs to further their research. Each visitor thereby becomes a unique and integral part of The Institute’s ongoing research.

Says Byrne, “Experiments, we feel, are a form of theater. We have adopted elements of art installation and immersive theater to present these experiences in ways we think will be as engaging for others as they have been for us.” ‘Neurosociety’ will run from October 28, 2016 through March 31, 2017 at 350 El Camino Real in Menlo Park, CA. Tickets are on sale.

That is not the only big-scale project Byrne is working on. He’s also developing a musical about Joan of Arc, titled Saint Joan, which will debut at NYC Public Theater on Valentine’s Day, 2017. (The Public Theatre is also where Byrne staged Here Lies Love.) Here’s the gist from Byrne:

Why has this story endured over centuries and been made into so many plays and movies? Because it’s about someone—a nobody, a teenage girl—who inspired others to act, to overthrow their oppressors and take charge of their lives. She transforms from an innocent, into an androgynous warrior, and finally a martyr. Joan’s story is about the power of the individual to make a difference and (for me) the hubris and sometimes oversteps that often go along with that. In other words—it’s completely relevant.

No word on when tickets will go on sale for Saint Joan, but Byrne did play three songs from it at the Roots Picnic on Sunday (10/2) — “I Was Changed” (which he also performed as part of his Contemporary Color show), “Nothing Ever Changes” and “The True Vine.” Did you catch David at The Roots Picnic?