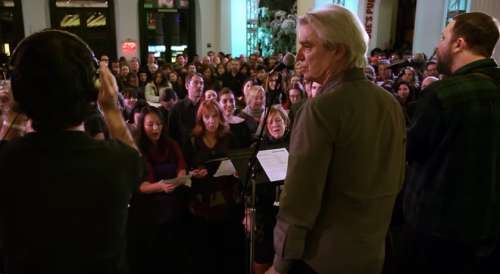 Earlier this month, David Byrne teamed with Choir! Choir! Choir! for a performance as part of New York’s Under the Radar Festival. In tribute to the late, great David Bowie, the Talking Heads frontman and the crowd-sourced singing group covered “Heroes”. Fan-shot footage of the performance appeared online not long after the event, but now an official video has been released.

“There is a transcendent feeling in being subsumed and surrendering to a group. This applies to sports, military drills, dancing… and group singing. One becomes a part of something larger than oneself, and something in our makeup rewards us when that happens. We cling to our individuality, but we experience true ecstasy when we give it up. So, the reward experience is part of the show.”

Watch the clip below.

Byrne recently announced American Utopia, his first solo album in 14 years, which is due March 9th. It will be supported by an 80-date world tour Byrne’s described as “the most ambitious show I’ve done since the shows that were filmed for [Talking Heads’] Stop Making Sense.” He’ll also appear at a number of festivals including Coachella, New Orleans Jazz, and Shaky Knees.