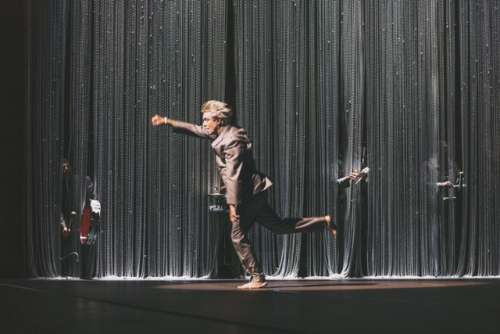 David Byrne will hit the Broadway stage in a New York bow of his acclaimed American Utopia tour. The theatrical concert experience will play a pre-Broadway engagement at Boston's Emerson Colonial Theatre September 11–September 28 before beginning at the Hudson Theatre (currently home to Burn This) October 4. Opening night is set for October 20.

The Scottish-American musician teams up with Tony-nominated director Alex Timbers, who serves as production consultant, along with choreographer Annie-B Parson. The three reunite after collaborating on the Off-Broadway Imelda Marcos musical Here Lies Love. (Timbers also directed Byrne's Joan of Arc: Into the Fire.)

"As I was recording the songs for my American Utopia album, it occurred to me that they would be exciting to play live, and I realized that a lot of my older material would fit right in. I imagined a live show," Byrne said. "Parked in a beautiful Broadway theater we can perfect the sound [from sound designer Pete Keppler], the lights [by Rob Sinclair], the movement. I thought to myself that this new context might be good—it might bring out the narrative arc a little bit more, to make it just a little more explicit."