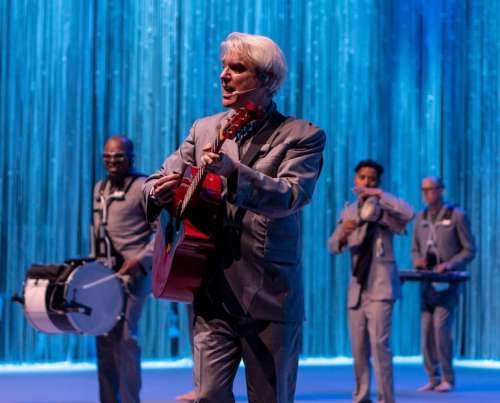 David Byrne’s show, American Utopia, that among other things, reviews his musical career (solo and with The Talking Heads), has already been viewed in 2018 when the show’s world tour was sold out and got rave reviews. This time around somewhat redefined for the theatrical stage by Byrne, production assistant Alex Timbers and choreographer Annie-B Parson, it will hit theatre stages.

As Billboard reports, Byrne will take the show first to Boston’s Emerson Colonial Theatre from September 11-28, 2019 and then to 1,500 capacity Hudson Theatre on Broadway for 16 weeks, starting from October 4.

Byrne explained his intentions in a letter on his website: “Because of how theatrical the show is, others started telling me, ‘This needs to go to Broadway.’ Parked in a beautiful Broadway theater, we can perfect the sound, the lights, the movement — we don’t have to adapt to a new place every night! It was an exciting challenge.”

He also described American Utopia, picking its title from his seventh solo studio album, as “untethered” as his 11-piece band composed from musicians from all over the world will be entirely mobile on stage.

“As I was recording the songs for my American Utopia album, it occurred to me that they would be exciting to play live — and I realized that a lot of my older material would fit right in,” Byrne wrote. :I imagined a live show…I pictured a lot of drummers, a kind of drum line/samba school/second line – that would create the rhythms. I had this vision of how exciting that would be — both for me and for an audience.”