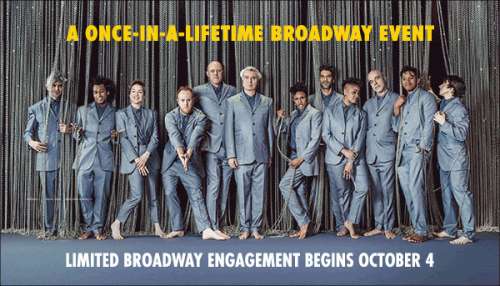 David Byrne‘s acclaimed American Utopia tour is indeed coming to Broadway for 16 weeks at the Hudson Theatre from October 4, 2019 – January 20, 2020 (the official opening is October 20). Like the tour, this stage production features Byrne and 11 musicians presenting his songs — both solo and Talking Heads — in an “untethered” form on a stage free of cables, amplifiers and other equipment that is visually striking and sonically powerful, with choreography by Annie-B Parson. Tickets are on sale now.

David explains further about his decision to bring American Utopia to Broadway:

Because of how theatrical the show is, others started telling me ‘this needs to go to Broadway.’ Why not? But what did that mean? Parked in a beautiful Broadway theater we can perfect the sound, the lights, the movement. I thought to myself that this new context might be good – it might bring out the narrative arc a little bit more, to make it just a little more explicit. I asked Alex Timbers, whom I’d worked with twice before on musicals, to help. He brought some original and insightful ideas to the room, ideas I was too close to imagine, and we used those to build on what we had.

People ask me will I be darting into a town car after these shows or taking a flying leap onto my bicycle…take a wild guess.

Watch a trailer for the show below. Leading up to the Broadway run, Byrne will present American Utopia at Boston’s Emerson Colonial Theatre from September 11 – 28 (tickets).