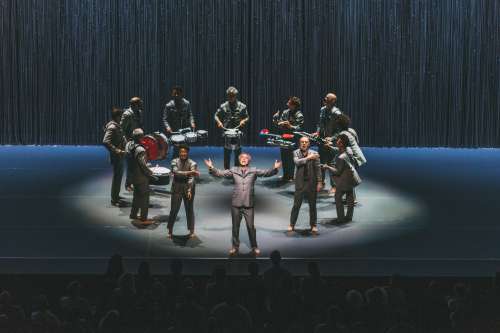 After a year-long, acclaimed international tour, Scottish-American singer-songwriter David Byrne's acclaimed theatrical concert American Utopia will arrive on Broadway this fall. The production will play the Hudson Theatre beginning on October 4, 2019 and officially opening on October 20 for a limited run through January 19, 2020. In advance of Broadway, the show will play Boston's Emerson Colonial Theatre from September 11-28, 2019. Tickets are now on sale.

In American Utopia, Byrne shares the spotlight with a diverse ensemble of 11 musical artists from around the globe. The show was created with choreographer Annie-B Parson and production consultant Alex Timbers: his collaborators on the off-Broadway hit Here Lies Love.

American Utopia began as an album that Byrne released on Nonesuch Records in March 2018. The recording was his first to reach #1 on the album chart and was also his first to reach the top five on the Billboard 200 chart. The concert, which includes songs from American Utopia, along with songs from Talking Heads and his solo career, played more than 150 dates in 27 countries over nine months in 2018.