Via A Journal of Musical Things 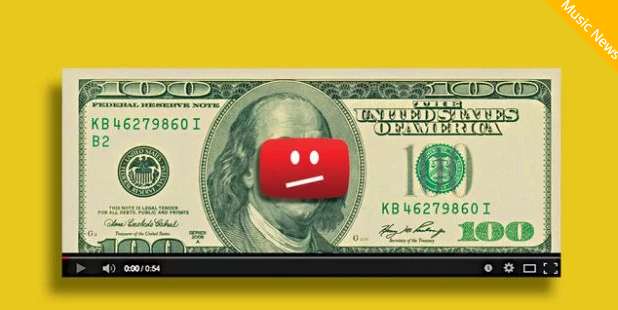 A small but growing number of notable musicians are calling out YouTube for failing to pay artists for plays on the platform.

Earlier this week, Trent Reznor told Billboard he believes YouTube’s business is “very disingenuous. It is built on the backs of free, stolen content and that’s how they got that big. I think that any free-tiered service is not fair.” Reznor, who was speaking as part of an interview on the one-year anniversary of Apple Music along with Jimmy Lovine, Eddie Cue and Robert Kondrk, added that YouTube is “making their numbers and getting them a big IPO and it is built on the back of my work and that of my peers. That’s how I feel about it. Strongly. We’re trying to build a platform (at Apple) that provides an alternative—where you can get paid and an artist can control where their [content] goes.”

On Thursday, Patrick Carney of the Black Keys took to Twitter to voice his concerns. 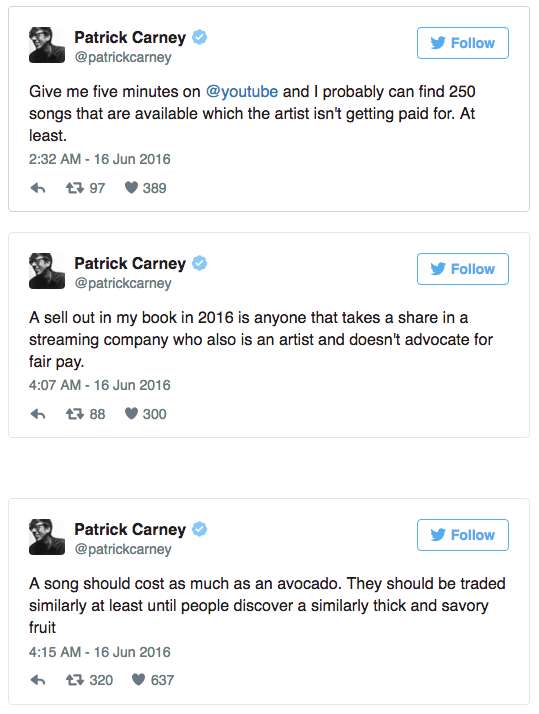 They’re far from alone, of course. In an op-ed piece in the New York Times almost a year ago, David Byrne, of The Talking Heads and a robust solo career, said the biggest problem artists face today is a lack of transparency, a problem to which services like YouTube contribute.

“I asked YouTube how ad revenue from videos that contain music is shared (which should be an incredibly basic question),” he wrote. “They responded that they didn’t share exact number, but said that YouTube’s cut was ‘less than half.’ An industry source (who asked not to be named because of the sensitivity of the information) told me that the breakdown is roughly 50 percent to YouTube, 35 percent to the owner of the master recording and 15 percent to the publisher.”

Further, most musicians are, in essence, entrepreneurs. “We are essentially partners with the labels, and should be treated that way,” Byrne said. “Artists and labels have many common interests—both are appalled, for instance, by the oddly meager payments from YouTube (more people globally listen to music free on YouTube than anywhere else).”

In November 2015, when asked by Italian newspaper Repubblica how he listened to music, Yorke quickly responded “I don’t use YouTube, that’s for sure.”

In his pointed way, Yorke continued to say that the ads played before videos on YouTube are making somebody a lot of money, but it’s not the artists.

When asked how artists are making their income these days, considering all the possible paths to payment, Yorke said “I don’t know, you tell me. I don’t have a solution for these problems. I just know [YouTube] makes money [from] the work of so many artists that don’t make any profit….They keep saying that this is an era where music is free, where cinema is free. Not true. The makers of these services make money. Google, YouTube; a huge amount of money, trawling like in the ocean, taking everything there is. ‘Oh, sorry, was that yours? Now it’s ours. No, no just kidding—it’s still yours.”

And then, because apparently someone had to do it, Yorke said that YouTube has “seized control of [art]— it’s like what the Nazis did during the Second World War. Actually, it’s like what everyone was doing during that war, even the English—stealing the art of other countries. What difference is there?”

Yorke also noted that he’d recently read Byrne’s book on the music industry, after it was recommended to him by his 14-year-old son. “When Byrne [argued] against Spotify, it was a relief. ‘Ah, finally. I’m not the only one to say that it’s not right that it works that way’,” Yorke said.

For what it’s worth, YouTube responded to Reznor’s comments, providing a statement to Pitchfork on Wednesday.

“The overwhelming majority of labels and publishers have licensing agreements in place with YouTube to leave fan videos up on the platform and earn revenue from them,” the statement says. “Today the revenue from fan uploaded content accounts for roughly 50 percent of the music industry’s YouTube revenue. Any assertion that this content is largely unlicensed is false. To date, we have paid out over $3 billion to the music industry–and that number is growing year on year.