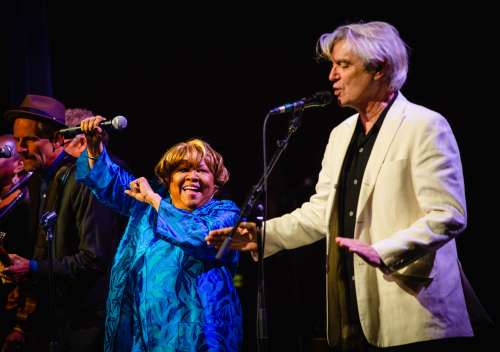 Halfway through her star-studded 80th-birthday concert at New York’s Apollo Theater, Mavis Staples paused her half-century-plus–spanning set to take in her adoring crowd. “I’m too excited to talk!” she cried out from the Apollo stage, 63 years after first appearing at the theater as a teenager with her family band, the Staple Singers, in 1956.

Staples then launched into a bursting-with-joy duet on the title track from her 2016 album Livin’ on a High a Note with the song’s writer, Valerie June, one of 20-odd younger musical disciples the singer has gathered for a series of collaborative concerts taking place this month in celebration of her upcoming 80th birthday. (Staples has said she wants to learn how to skateboard to celebrate the occasion.)

These shows, which will feature a rotating cast of special guests at upcoming concerts in Nashville and Los Angeles, are benefits for the Newport Festivals Foundation, which raises money for music education nationwide. There is perhaps no living American artist better suited to play host to a charity concert than Mavis Staples, who has been delivering the Staple Singers’ civil-rights-movement–era gospel-folk declarations of social justice to audiences for more than 60 years.

Accordingly, Staples followed up the gleeful “High Note” with “Freedom Highway,” the 1965 Staple Singers signature statement that remains the cornerstone of her show today. With this segue, the 79-year-old showed off the emotional and narrative range of her work as a singer-activist-performer-preacher. Indeed, Staples’ 90 minute performance, which featured special guests that ranged from Maggie Rogers to Warren Haynes, was a stirring display of the many personas she embodies each time she takes the stage: Mavis the motivator, Mavis the agitator, Mavis the healer and Mavis the bridge-builder. “I’m going to open my heart to a stranger,” she would sing later on, summing up her extraordinary lifetime as a prophet of peace. “I think I know where to begin.”

But the Mavis who shined brightest Thursday at the Apollo was the collaborator, as she welcomed a steady stream of guests, including self-contained bands the Lone Bellow and Lake Street Dive, rock legend David Byrne, piano virtuoso Jon Batiste, and guitar master Jason Isbell, to accompany her throughout her career-spanning concert. Bridging gospel, folk, blues, R&B, and rock, Staples’ songbook has always lent itself well to genre-crossing, and she sounded equally home performing, at long last, her definitive cover of Talking Heads’ “Slippery People” alongside Byrne as she did teaming up on the ages-old spiritual “Will the Circle Be Unbroken” — “the first song Pops Staples taught us, in 1949,” she explained — with rising pop star Maggie Rogers. Best were her electric duets with like-minded musical inheritors like June and Norah Jones, who traded vocals on a note-perfect take on Staples’ late-career trademark “You Are Not Alone.”

Before Staples took the stage, the night began with a brief opening set from a mix of younger singer-songwriters who provided vital context for the evening ahead, educating the crowd on some of the finer points of Staples’ expansive discography. Most compelling were Lake Street Dive’s standing-ovation–earning take on the Staple Singers’ 1972 B side “I’m Just Another Solider,” as well as Hiss Golden Messenger’s M.C. Taylor and the neo-gospel singer-songwriter Liz Vice’s acoustic rendition of the Staple Singers’ initial mid-Fifties breakthrough “Uncloudy Day.”

After her musical grandchildren began the evening performing her own catalog rarities, Staples used her own set to showcase recent material from the five studio albums she’s recorded within the past decade. The singer is still touring with more contemporary relevance and of-the-moment urgency than nearly any other performer in the supposed twilight of their career, let alone her few remaining contemporaries. More than half of her main set came from material released since 2010’s You’re Not Alone. She performed several tracks from her newest collection We Get By (out later this month), including “Change,” a charged blues call to action that included a marquee guitar solo from Isbell. When she did reach back to her greatest hits for her classic “I’ll Take You There,” she made it clear it was a departure from the main task at hand. “We’re going to take them back down memory lane!,” she said with a grin. “1971!” 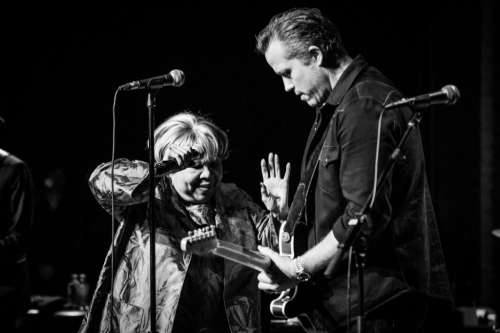 On the verge of her ninth decade, Staples’ voice was still profoundly expressive at the Apollo, communicating universes of indignation and determination and lifetimes of exasperation and ecstasy as it alternated between vicious snarl, spirited cry and soulful whisper, often within the span of the same song. After taking a few numbers to fully warm up, by the latter half of her set — which concluded with a full-cast singalong on her iconic cover of the Band’s “The Weight,” as seen in The Last Waltz — Staples was singing and performing with the energy of someone several decades her junior.

“Eighty, y’all — just 80, that’s all,” she assured the crowd at one point, before providing one more note of comfort: “We’ll be back for the 85th.”

Mavis Staples Set:
“If You’re Ready (Come Go With Me)”
“Take Us Back”
“Anytime”
“Slippery People” (with David Byrne)
“Change” (with Jason Isbell)
“For What It’s Worth” (with the Lone Bellow)
“High Note” (with Valerie June)
“Freedom Highway”
“Will the Circle Be Unbroken” (with Maggie Rogers)
“We’re Gonna Make It” (with Warren Haynes)
“Build a Bridge” (with Lake Street Dive)
“You Are Not Alone” (with Norah Jones)
“I’ll Take You There” (with Jon Batiste)

Encore:
“The Weight” (with everyone)