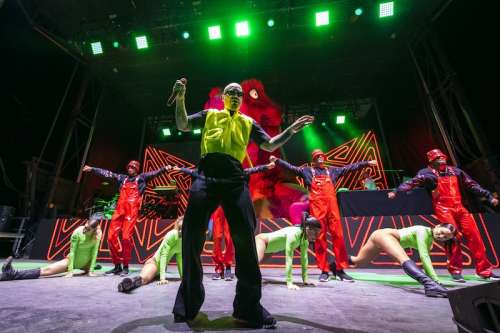 Last night, pioneering hip-hop trio De La Soul touched down at Banger’s for StubHub’s Sound Stage. Check out our review of the two-day event’s kickoff, and catch headliners Sir Sly and Judah & the Lion this evening. New rap voices also made a splash in the hump-day happenings.

Columbian superstar J Balvin took over a festival-sized stage behind Native Hostel, bringing the full energy of his 2018 his Vibras Tour with eight backup dancers and a giant, inflatable Tyrannosaurus rex. Hits including “Reggaeton” and supersonic Cardi B collab “I Like It” bookended Uforia’s first day of programming as “The Home of Latin Music” at SXSW. A division of Univision, Uforia announced partnership plans with Napster to create a streaming platform at a press conference prior.

Wednesday at the Convention Center, famed Fort Worth producer T Bone Burnett initiated with thoughts on the modern music industry. Sage advice from David Byrne followed up at his own session, highlighting positive advocacy efforts worldwide for his Reasons To Be Cheerful project. Find Against Me! activist Laura Jane Grace in discussion today at the fest, and peruse our Chronicle preview interview.