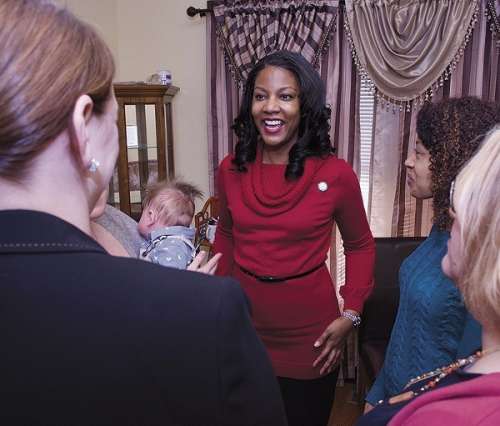 What gives musician David Byrne hope, even in a dark time? How about the political success of Tishaura Jones?

The lead singer of the Talking Heads launched a new online platform last week, Reasons to Be Cheerful. It's a thoughtful, idiosyncratic roundup of the things he's read about or contemplated that make him happy.

And that hope, he suggests, is embodied in people like Jones.

The elected treasurer of St. Louis, the darling of local progressives, came within 888 votes of taking last year's crowded Democratic primary for mayor — and Byrne sees in that a very positive thing. Civic engagement is on the rise, he notes. The people are making their voices heard. People, yes, like those represented by Jones.

"This is Tishaura Jones," he explains in a talk at the New School on January 8, a photo of Jones on the screen behind him. "She ran for mayor of St. Louis. .... She had a lot to say. She did not win, but she changed the conversation. She talked a lot about race, inequality, justice minimum wage, transportation.... So, in a sense although she did not succeed, she did change the conversation."

You can hear more about the New Waver's project via the video we've posted below or its website. We've cued up the video at the part where he talks about Jones, but it's worth backing up and listening to the whole thing if you're in need of a pick-me-up.

Now, you may ask yourself how we're supposed to see hope in defeat. But Byrne seems adept at taking the long view, at keeping an eye on the bigger picture. In that, St. Louis may indeed have reason to be cheerful.