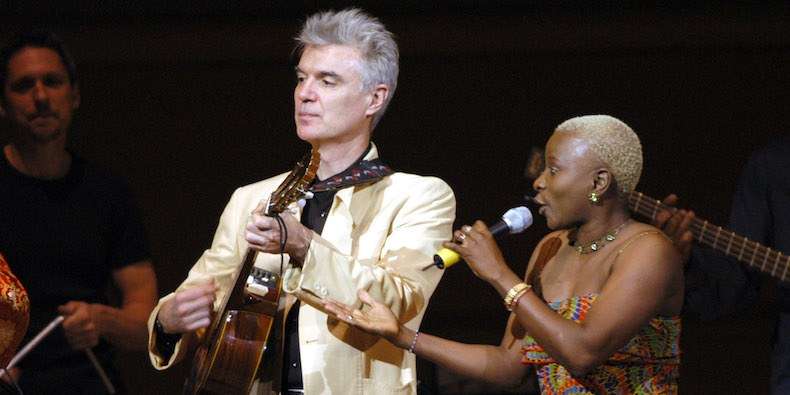 Last night, David Byrne joined Angélique Kidjo as a surprise guest at Carnegie Hall. Byrne and Kidjo teamed up for a rendition of the Talking Heads’ classic “Once in a Lifetime.” In the footage, the two can be seen holding hands and dancing together; watch it go down below. The two previously performed together at Carnegie Hall during the 2004 Tibet House Benefit Concert. For last night’s concert, the Beninese singer performed the entirety of the Talking Heads’ 1980 album Remain in Light, which incorporates elements of West African music. In an interview with Playbill, Kidjo explains her gratitude for the Talking Heads’ work and why she chose to recreate it live:

I discovered [the Talking Heads’] music and fell in love with the Remain in Light album. Brian Eno and Talking Heads understood the magical power of African music, but instead of trying to clone it, they created their own style based on the hypnotic rhythm patterns of Fela Kuti’s Afrobeat. The cryptic lyrics were also resonating with me. Somehow I felt I was hearing, in a strange way, social commentaries on the state of my continent.