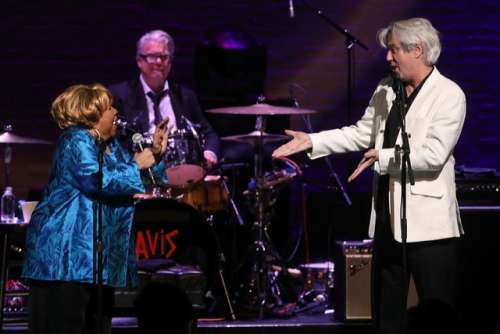 David Byrne and Mavis Staples are two legends who come from vastly different musical traditions, but they’ve got a long history with each other. And it’s a history built around one song: “Slippery People,” a twitchy and gospel-influenced jam from the 1983 Talking Heads album Speaking In Tongues. A year after the Talking Heads released their version, the Staple Singers, the mythic and eternal soul/gospel family band, recorded their own version of “Slippery People”; David Byrne played guitar on it. The Staples’ “Slippery People” cover was a minor hit — #109 on the pop charts, #22 R&B — and the Staples Singers performed it on Soul Train. In 1986, Byrne cast Staples patriarch Pops Staples in his movie True Stories. And in 2017, Mavis Staples recorded another “Slippery People” cover with Arcade Fire. Staples and Byrne go back together.

Together, they did a version of the song that involved the two of them scatting nonsense syllables back and forth at each other. They both looked overjoyed to be there. Watch some fan-made videos below.

“Love from the bottom to the top” - #DavidByrne joins @MavisStaples to perform “Slippery People” at a celebration on Mavis’ 80th birthday tonite at @ApolloTheater #talkingheads pic.twitter.com/mkdypg465p

�� Mavis Staples with David Byrne at the Apollo �� pic.twitter.com/tSkJIRS4ZE

And here, while we’re at it, is last night’s all-star encore cover of the Band’s “The Weight”:

Mavis Staples’ new album We Get By is out today on ANTI-.