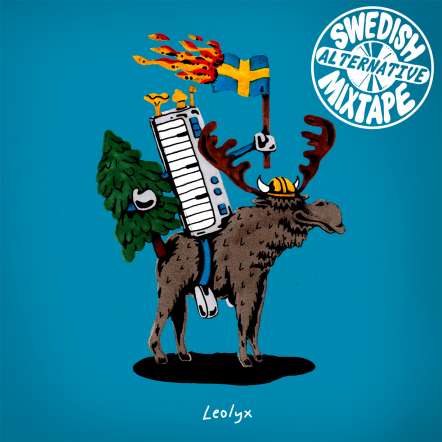 Leo Hallin is an illustrator, animator and visual artist from Sweden, who goes by name Leolyxxx. For this month’s show, he has put together a fun mix of left-field Swedish music from the ’70s and ’80s (being Swedish myself, I was surprised to realize I had never heard any of these songs before!).

Leo is a passionate record collector who has his hands deep in many different styles of music. Whether it be intensely beautiful, long-lost soul from the American south, or brilliantly weird disco jams from northern Europe—he always introduces me to great stuff. He is one of those people who will always know loads about whatever seemingly obscure record project we’re working on here at Luaka Bop, making it feel all the less obscure… ha!

Leo is also an excellent story teller. With a long background in graffiti and street art, I’ve always admired his ability to capture the essence of any story or subject, and how he makes it accessible to a wider range of people, independent of their age, or background. Since I got to know him a few years ago, we have come to collaborate on a bunch of projects together. He made these videos for our William Onyeabor album, and recently just finished a biographic animation about Doug Hream Blunt, narrated by Doug’s 11 year old daughter, Juanita (that we are to release soon!). Here is one of my favorite short films by him with music by Chuck Jackson:

Hope you like music. And thanks to David A Macleod for editing the audio for this month's playlist!

PS: If you like what you hear in this month’s show, don’t miss Leo’s second part of this mix, which was just posted on the site Dream Chimney.