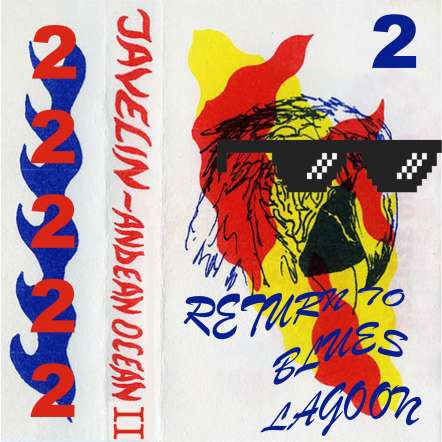 Javelin (not to be confused with the metal band of the same name) is a band who have released records through Luaka Bop. They also create mixtape-collages and have generously offered that we can stream the latest one, Andean Ocean II here. It is one hour long, no breaks. Below is an explanation in their own words how these have evolved.

Eleven years ago we released a cassette entitled “Andean Ocean.” It was a riff on the soundscape genre, typified by the Environments record series or by the Mystic Moods Orchestra. Easy listening style “muzak”often plays alongside environmental sounds, with spoken word poetry or storytelling thrown in for good measure. Ostensibly, the function of these records is to transport the listener to another place, or simply allow them to relax.

Our version of this is more abstract with fewer stylistic “rules.” The Andean Ocean is a mythical place, defined by whatever music we feel belongs there, whose parameters we make up as we go along. Daryl Dawkins, one of the first NBA players to regularly slam dunk during competitive play, had names for all his dunks which he had only just invented. We always wondered if he knew the names beforehand, or if he came up them on the spot during post-game interviews…

For the first Andean Ocean we sampled records and tapes unearthed from thrift stores and record shops we frequented, to create new tracks or construct mash-ups. We mixed in wholly original songs as well, and built tracks around highly abstracted samples so as to completely obscure them. Our goal was to confuse the listener in not knowing what was original and what was sampled — a mixture we dubbed “Dollar Bins Of The Future” — a sort of enhanced collage, i.e. creating our ideal thrift store find.

This time around the same techniques apply, only with less physical crate digging and more digital search queries. One fun thing anyone can try on Spotify is to use the Advanced Search function. Example: “year:1950-1983 waves.” Then click “See all songs.” This will show you all the tracks held in their database between those years that include the word “waves” in the song or album title. The first hit you see is Waves by Norma Tanega, which is not included on this mix, but is an absolutely fantastic jam.

So if you hear the words “water,” “sea,” or “coast” in this mix, now you know how most likely they were found. Very different than 2009 when all we had were our hands and a few thousand records in the basement of a moldy junk shop.