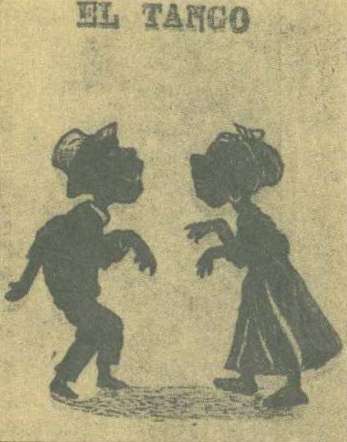 Here’s a playlist that doesn’t delve into the classics (no Carlos Gardel). This playlist highlights tango from the last 50 years including the radical reinventions of Astor Piazzola to the present day of electronic tango and a lot more.

We think of tango as a sexy couples dance associated with Argentina, usually performed by folks in elegant attire - and it is. Is it patriarchal, or is the woman actually leading? I’ve seen it where folks of all sorts of ages and body types all appear elegant and sexy. It seems passionate, but very much about control. There’s a real tension there.

Lots of controversy surrounds the origins of tango-

From Trip Down Memory Lane blog:

There is much debate over the exact origins of what we now know as the tango, however one undeniable truth remains the immense influence of Afro-Argentines in the formation of the tango. The name itself, "tango", is widely believed to be of West African origin meaning "closed space" or "reserved ground".

This origin seems to be in accordance with the 19th century use of the word, when it referred to any place where Africans assembled to dance. Only later did the word tango come to refer specifically to Afro-Argentine dance, before being ascribed to the specific form of couple dancing we know today as the tango. Both the dance and the musical style known as tango has three main antecedents, the lunfardo, the milonga and the candombe

What are those three things?

[Originally, Lunfardo was a slang used by criminals and soon by other people of the lower and lower-middle classes….it came to refer to BA slang.

A milonga often refers to an impromptu get together that features music and dance…I went to one in a loft in NY once and one in the central court of Chelsea Market. The milonga also refers to a dance- and here it gets complicated

The milonga dance has a lot of its roots in the racist past of Buenos Aires Carnivals. These Carnivals took place from the mid nineteenth all the way to modern day. In Buenos Aires these carnivals were celebrations that occurred before the start of lent and were filled with music and dancing including Milonga. Milonga was danced by the elites who wore blackface to mock people of African descent, with the practice beginning roughly in the 1860s. The tradition of wearing blackface to dance Milonga spread from Buenos Aires throughout Argentina.

Lastly, Candombe- is a style of music and dance from Uruguay- usually practived by freed slaves or their descendents. The Uruguan singer Rada does songs with roots in Candombe]

Back to Trip Down Memory Lane blog:

The topic of “Race” is still a topic which awakens deep passions….Robert Farris Thompson’s, “The Art History of Love” in which he makes a strong argument for the African roots of tango, even precipitated a heated battle of critics over the subject…in startling acrimony, reviewer Anthony Howel says of Thompson’s book “this irrelevant and dishonest book…the author makes irresponsible claims and insists in implying that white folk stole tango from the blacks”...in a counter-accusation, reviewer Christopher Everett defends Thompson and in a point by point rebuttal…”Tango, The Art History of Tango” is in fact a thoughtful, well documented and well written book…the number of people of African descent in Argentina went from 34% in 1810 to 2% in 1887 and their disappearance is a subject of controversy and a source of racist humor among the residents of Buenos Aires…reportedly, when the great Josephine Baker visited Argentina in the 1950s, she asked the bi-racial minister of public health Ramon Carillo, “Where are the Negroes ?”, Carillo responded laughing, “there are only two, you and I”