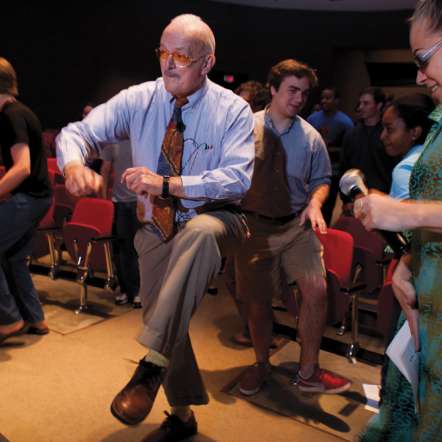 Professor Robert Farris Thompson passed away in November, and this playlist is dedicated to him. Technically, he was a professor of what he referred to as “Afro Atlantic art and culture” at Yale University. But his interests and influence reach wider than art history- they encompass dance, philosophy, music, dress, poetry and spirituality.

I first came across his writing when Brian Eno and I were recording a record called My Life In The Bush of Ghosts. We both were reading his book “African Art In Motion”, which emphasized the contexts of where the masks and costumes came from - he pointed out that isolating an object from it’s ritual and performance context is to remove much of it’s meaning. To a performing musician like myself - this made perfect sense. It would be like trying to understand the power and meaning of rock and roll, or hip hop from looking at the stage costumes without hearing the music or seeing the show…

Dr Bob’s writing is enthusiastic, energetic and poetic- as if Kerouac were channeling Coltrane- riffing on Afro Atlantic dance, music, culture - jumping to wide ranging inferences - seeing the rhythm in fabrics, the philosophy and moral authority in gesture and dance.

From the Yale Alumni Magazine:

(Young Thompson is in Mexico with his parents)

That evening, in the hotel dining room, “I heard this bee-DEEM-brakata, extraordinary offbeat music. I asked the waitress, What’s that? She said mambo.”

On that day, says Thompson, “My life changed. Mambo irradiated me with classical Afro-Atlantic music, and there was no turning back.”

(this is why this playlist is mambo centric- the mambo he heard was The Newpaper Mambo-La Camisa De Papel. I couldn’t find it on streaming. It is a surreal image of a guy wearing the headlines on his shirt- tropical surrealism you can dance to- no wonder Bob was smitten)

One of Dr Bob’s notebooks- 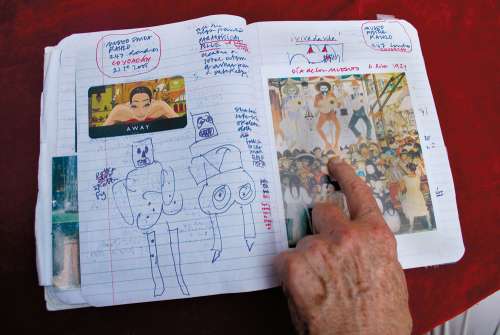 From the same piece

Thompson takes the microphone to give a tour of the piece. “The trumpet is building some sort of staircase, some sort of ecstatic staircase, and it will be picked up and change mambo forever.” Now Thompson tells the audience to listen for “a little bit of Schoenberg,” a subtle dissonance “like heat lightning in Jersey being observed from Manhattan. Pérez Prado did the impossible. He made dissonance popular. He put it into a groove.”

I got to know Dr Bob in the early 80s. When Talking Heads released Remain In Light- I added a bibliography to the press release- what I had been reading at the time. Among the books was African Art In Motion. A bit pretentious of me, maybe, but as a result Thompson reached out to me and we eventually became friends (and maybe a few more folks read his books?). We’d go to voudoun and santeria ceremonies here in NYC, and when I began my planning to make a documentary on the afro brazilian spiritual practice Candomble - Bob connected me with people in Bahia who were invaluable. My world view was changed- and I think I was changed as a person as well.

Thompson has written many books- if you’re curious, “Flash Of The Spirit” is a good concise introduction to his work. It encompasses music, art, dance, philosophy, dress, cuisine and of course ritual and spirituality.