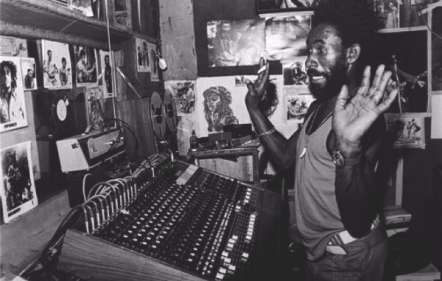 Is Jamaican dub one of the prime roots of hip hop? Logically it would seem so… Sound system operators would request an instrumental version of a track to see if folks danced to it - and naturally a DJ might pick up a mic to hype and introduce the track about to be played. This would appear to naturally evolve into “toasting” - vocal exhortation and even rhymes over the instrumental backing track. Not to mention - there were plenty of Jamaicans in Brooklyn and the Bronx.

From wikipedia RE: roots of dub

Initially these [instrumental] acetates would simply be the standard recording of a song that wasn't yet released on a single, but around 1968-69 they started to be exclusive mixes with some or all of the vocal mixed out, as described by producer Bunny Lee:

"Yeah...it was really VERSION those days - it wasn't dub yet beca' it was jus' the riddim. One day an incident: Ruddy's (sound system operator Ruddy Redwood) was cutting dub, an when it start, Smithy (recording engineer Byron Smith) look like 'im start bring on the voice and Ruddy's say: no, mek it run and 'im take the whole backing track off it. 'Im say, alright, run it again, and put in the voice. 'Im didn't do no more like that yet."

After describing how Redwood then had his deejay first play the vocal version and then the instrumental version at a dance, and how popular this novelty was, Lee continued,

Often these tracks are used for "toasters" rapping heavily rhymed and alliterative lyrics. These are called "DJ Versions". In forms of sound system based reggae, the performer using a microphone is referred to as the "DJ" or "deejay" (where in other genres, this performer might be termed the "MC", meaning "Master of Ceremonies", or alternately, the later developed slang terms: "Microphone Commander" or "Mic Control"), and the person choosing the music and operating the turntables is called the "selector" (sometimes referred to as the DJ in other genres).

A major reason for producing multiple versions was economic; a record producer could use a recording he owned to produce numerous versions from a single studio session. A version was also an opportunity for a producer or remix engineer to experiment and express their more creative side. The version was typically the B-side of a single, and used for experimenting and providing something for DJs to talk over, while the A-side was more often dedicated to the original vocal-oriented track.

Yale professor Michael Veal described dub as "the sound of a society tearing itself apart at the seams”. His book, “Starship Africa”, says that the African diaspora is reflected in dub by the "extensive use of reverberation/delay devices and the fragmentation of the song surface" – he considers dub's use of reverb a "sonic metaphor for the condition of diaspora." Veal wrote that dub creators used echo and reverb to elicit memories of African culture in their listeners.[28] King Tubby, Lee Perry, Eroll Thompson, Mad Professor, Jah Shaka, Denis Bovell and Lynton Kwesi Johnson influenced rock musicians. From the 1980s forward, dub has been influenced by, and has in turn influenced, techno, dubtronica/dub techno, jungle, drum and bass, dubstep, house music, punk and post-punk, trip hop, ambient music, and hip hop.