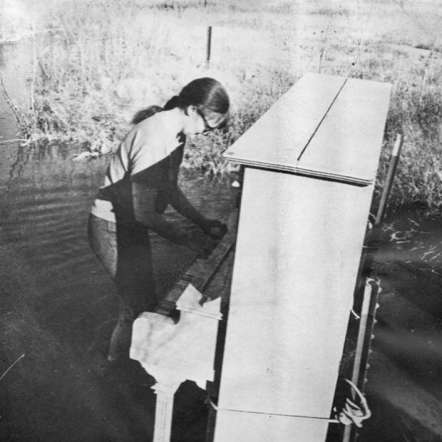 Off-site! is a mix of musical explorations of place. Sounds from real and imagined locations.

Hermeto Pascoal and O Grupo play underwater flutes and glass bottles in a lagoon. There is a video.

Max Neuhaus’ Times Square is a permanent sound installation emanating from below a sidewalk grate. Visit it here.

“…the river shapes its own sounds, just by the way it shapes its banks…Any single sound is a beautiful little composition in itself, with its interior details, and if one could just focus on one sound at a time and begin to perceive that structure, it would be exciting. The structures revealed would be infinitely more complicated than anything I could think up myself.” — Annea Lockwood

Brother Ah moved to a Tanzanian crater to play music with animals. "…monkeys, baboons, elephants, giraffes, hippopotamus, lions, leopards, cheetahs, flamingo birds, everything you can imagine - I lived down there." — Brother Ah

“Stuart Dempster and Panaiotis and I went to the cistern in Fort Ward and in Washington state, climbed down a 14 foot ladder into the cistern which had 89 pillars and was made of reinforced concrete and had a 45 second reverb time.” — Pauline Oliveros

Áine O’Dwyer records Underlight under the River Thames in a shaft of the Brunel Tunnel.

Hymn II, from Gavin Bryars' Sinking of the Titanic, supposes the music and chatter aboard the sinking ship might still be reverberating in the sea.

Glassine collages field recordings from the 2017 Women's March in Day 1.

By Noah Wall
Photo of Annea Lockwood by Richard Curtin, 1972