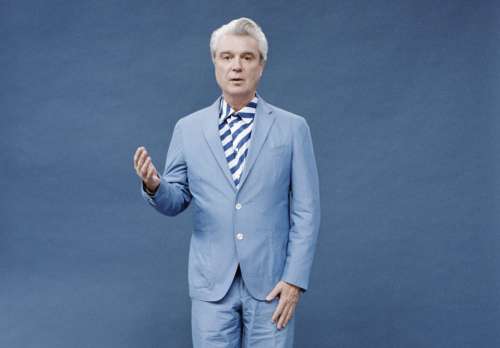 On one of his past tours, David Byrne surprisingly and ecstatically covered Whitney Houston’s “I Wanna Dance with Somebody (Who Loves Me).” The result, not unexpectedly, turned the audience into a dancing mass.

The former Talking Heads frontman’s current album, American Utopia, begins with his song “I Dance Like This,” so it’s not unreasonable to expect Byrne is out to accomplish the same thing on his current tour. But like everything in Byrne’s long and distinguished career, it’s not that simple.

“I Dance Like This” isn’t a straightforward dance tune. It starts with sedate, introspective piano chords, and then Byrne’s searching voice sings mysteriously idiosyncratic and puzzling lyrics to a gentle melody: “In another dimension/Like the clothes that you wear/A mighty, mighty battle/Sprouting illegal hair/A fitness consultant/In the negative zone/Wandering the city/Looking for a home.” The song then suddenly shifts, firing up a robotic Devo-like beat so Byrne can ominously drone, “I dance like this/Because it feels so damned good/If I could dance better/Well, you know that I would.”

It’s clear the song has something intellectual and sociological to say about the reasons for the existence of dancing. But you can indeed also dance to it, just as people are doing to many of the American Utopia songs Byrne is performing on his current tour.

“We gradually, especially in Latin America, are getting the crowd to dance more,” Byrne says. “It’s kind of a hilarious thing to watch.”

Of course, just as he did for Talking Heads’ landmark Stop Making Sense tour, that dancing might be because Byrne has assembled a band that can play driving, multi-layered rhythms superbly.

“It’s a very large band; including me, it’s 12 people,” Byrne says. “In order to get the sound of the percussion, it requires six drummers. North Americans think of it in terms of drum lines. The rest is pretty conventional — guitar, bass, keyboards and singer, that’s me. Other than the keyboards, the rest of those people are mobile. I play guitar every once in a while, but not very often. I think having been on road, we’ve pretty much cohered as a band.”

That can put listeners more at ease, physically, while their brains tackle lyrically challenging American Utopia songs like “Dog’s Mind,” where “dogs in our own paradise in a theme park all our own” don’t seem to care about a hungover judge attending a speech by the president. Or there’s “Everyday Is a Miracle,” which tries to puncture our human-centric way of looking at the world: “A cockroach might eat Mona Lisa/The Pope don’t mean shit to a dog/And elephants don’t read newspapers/And the kiss of a chicken is hot.”

“It’s a way of seeing the commonplace with fresh eyes, and then it’s also an amusing way of saying our point of view is not the only way of looking at the world,” Byrne explains of some of the album’s animal-referencing songs. “To other critters, the world looks very different. And who’s to say that our (view) is better or more perfect?”

On the current tour, the shows are not exclusively American Utopia songs, but rather a survey of his whole career.

“We’re doing a handful of those songs, some Talking Heads songs, songs from collaborations and solo albums, some cover songs,” Byrne says. He reveals he’ll be covering a Janelle Monáe song in Cincinnati; he has done her “Hell You Talmbout” at other tour dates.

Byrne is a unique and deep thinker about music (read his 2012 book How Music Works for further evidence) and the arts in general. That makes sense, given he’s also a visual artist who attended the Rhode Island School of Design and, in addition to achieving fame with the accessibly avant-garde Talking Heads, has worked on music projects with Brian Eno, Robert Wilson, Fatboy Slim, St. Vincent and many others.

So his thoughts on music’s special powers are valuable — and give insight on why his compositions can sometimes disguise rather than superficially complement what he’s singing.

“Music has this ability to simultaneously contain ideas and yet at the same time be very uplifting and emotional,” Byrne says. “It’s harder to do that in other forms. It can be a skeptical or analytical idea, but then be an emotionally energetic and uplifting song.”

“You can’t do that in a book the same way,” he adds. “Even in a movie, you can’t do it without intercutting — you can’t do it simultaneously. It’s probably because the rhythm, the melody and the sensations affect us in a very visceral way.”

A song from American Utopia that might at first seem to be an expression of unbridled joy, but actually is spikier than that, is “Everybody’s Coming to My House.” Byrne saw it as an expression of anxiety.

“In the past, I’ve found that socially uncomfortable,” he says. “The idea of lots of people coming to my house is possibly terrifying. But there’s a video where a choir in Detroit sings it, and their rendition completely changed the song. It was welcoming — ‘Come over everybody, come to my house, we’re all in same house.’ So that’s there in song, but I wasn’t aware of it when I wrote it.”

If there’s one song on American Utopia that really packs a wallop, it’s “Bullet.” It starts out coldly clinical about an unpleasant subject, like something Lou Reed might have done. But then it gets seductively more personal, without ever being melodramatic about it: “The bullet went into him/Through his heart with thoughts of you/Where your kisses he inhaled/The lies and truth.”

“It’s from the point of view of the bullet, itself,” Byrne says. “It starts off as a kind of clever idea, but as it goes on it has more emotional weight.”

One can’t help but see this as a plea for gun control, which Byrne has supported in his journals at davidbyrne.com. But, as ever with Byrne, it isn’t that cut and dry.

“There isn’t any one song I have that deals with specific policies,” he says. “They take a wider view. My assumption is to let the emotional weight of the song kind of resonate, and then (someone) might possibly take a different view of policies out there. But I’m not advocating a specific policy. A song might not be the way to do that.”