Colorguard and the Failure of Irony?

A group of us went to Dayton, Ohio this weekend to watch the World Colorguard Championships at the packed University of Dayton Arena. We’re on a trajectory pointing towards our Contemporary Color projects in Toronto and Brooklyn in June. Some of the musical artists participating attended to witness the colorguard phenomenon and to meet the teams they will be collaborating with: Tune Yards, How To Dress Well and Lucius were along on this trip.

Here is a picture Catalina Kulczar took of the parents of the Mechanicsburg High School team watching from backstage. A perfect Caravaggio if ever there was one… praying included! Gives an idea of the passions involved in this “sport of the arts." 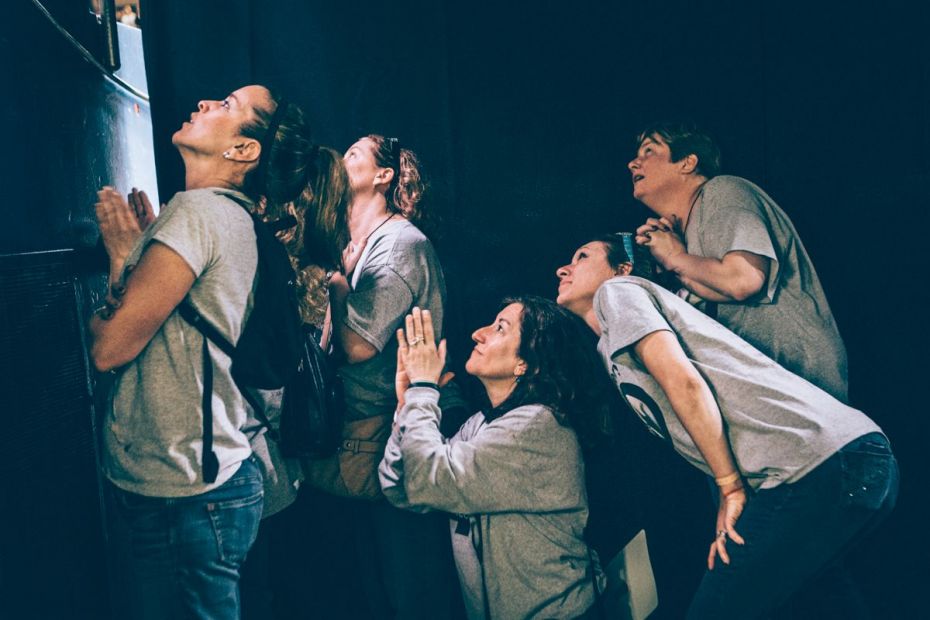 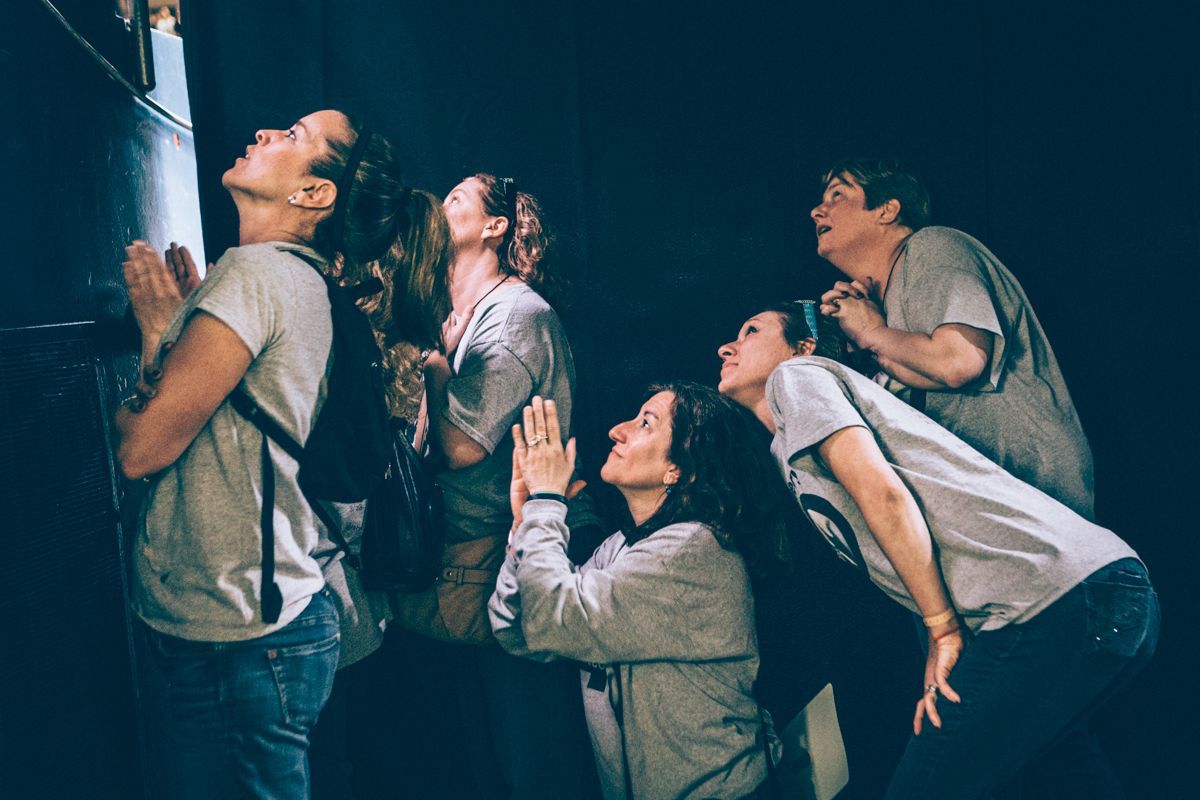 We watched the teams do their stuff for six hours straight. We had some moments to stretch, but the excitement only increased as the competition ramped up. The Japanese team, Aimachi, had everyone up and cheering, slack jawed in amazement. 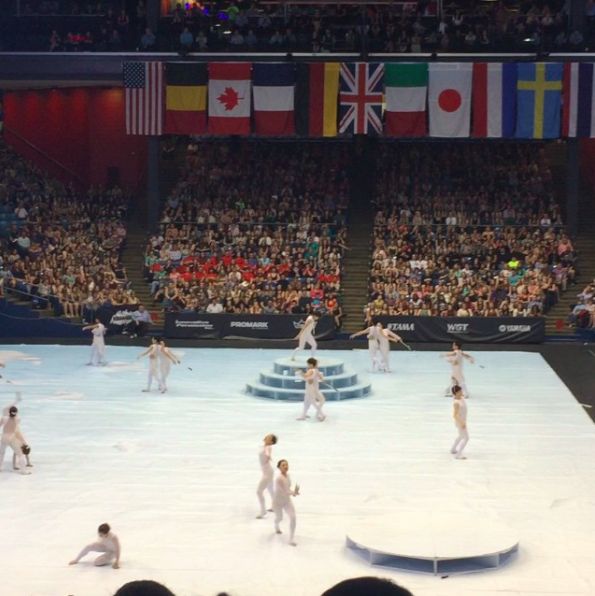 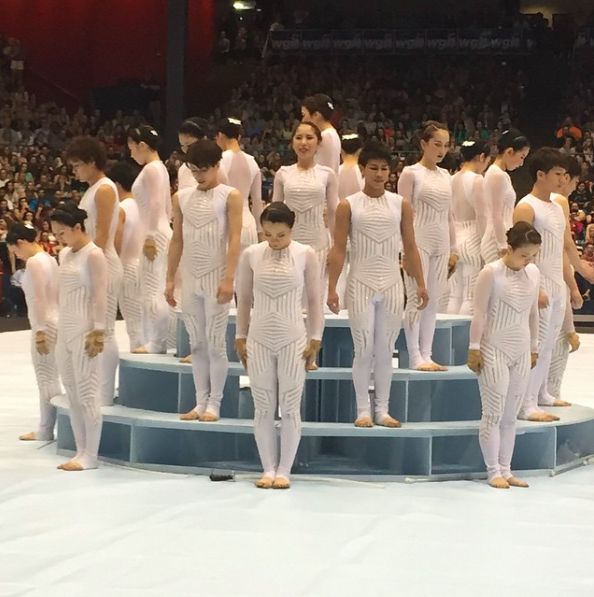 At one point we were watching a team give their final presentation of the day and I commented to Merrill (Tune Yards), sitting next to me, that the music they were using seemed to be one of a number inspired by the Imogen Heap tune in which she uses a vocoder to turn herself into a robotic choir. Merrill knew the song we were hearing: “The Hymn of Acxiom.” She said, "Oh, this is Vienna Teng, I was obsessed with her for a while (in a good way I hope) and she used to work for a tech company in the Bay Area and this song is a kind of response…it’s about data collection. This company is the one that 'reads' all your Gmails and scans them for references which it then sells that info so you can be targeted as a potential customer." That’s what this beautiful hymn is about?! Wow.

Here is the record version, and here are the lyrics:

"The Hymn Of Acxiom"

Let our formulas find your soul.
We’ll divine your artesian source (in your mind),
Marshal feed and force (our machines will)
To design you a perfect love—
Or (better still) a perfect lust.
O how glorious, glorious: a brand new need is born.

Is that wrong?
Isn’t this what you want?
Amen.

What is the marshal feed reference? Answers.com explains it as, "In computer science, marshalling (sometimes spelled marshaling with a single l) is the process of transforming the memory representation of an object to a data format suitable for storage or transmission, and it is typically used when data must be moved between different parts of a computer program or from one program to another." Another website explains more what it's about.

So, back to the scene, all this is happening as a colorguard team makes beautiful, evocative shapes in the middle of Dayton Arena. Their program doesn’t seem to be particularly about the issues surrounding data collection and how it is mined. The beautiful melody, its slowly rising intensity, and the gorgeous harmonies of this virtual and perfect choir seem to be what the guard is responding to, as have many others. Teng’s meaning, clear but nuanced and subtle, as she intended it to be, gets lost. I think.

In taking the character and point of view of the giant Acxiom corporation (who are based in Arkansas!) or of the program itself, she deepens the irony (in my view). You are seduced by the gentle, comforting words, as you would in a prayer or hymn, and the melody supports that. But one might assume that from Teng's, the author’s point of view, the lyrics are meant more as a criticism—a dark warning about how seduced we are by this aspect of our digital world. She mirrors that seduction in the surface effect of the song by how the song sounds, but the ironic meaning is that the beauty we enjoy is undercut and subverted by what we assume is Teng’s own point of view. (There’s no proof of this, as that would be the author intruding on the character’s point of view, which would break the spell, and the seductiveness of the spell is the whole point.)

I seriously doubt that the guard or the fans in the stands are getting all that—not that they’re stupid—I doubt I would have caught it without Merrill’s pointing it out. I only heard it as an Imogen Heap-influenced song at first. Is this, then, a failure of irony?

Not only here in Dayton Arena, but across the country, this Hymn has been picked up and used by marching band choirs, school choirs, and the like. It’s gone viral in that world, though I seriously doubt that most of them think of it as a criticism of data collection and use.

I have created similar problems for myself at times, so I have thought about this a little. I’ve written songs from characters’ points of view and, if they really “work,” you are sucked into those points of view; you buy into it. So, the more successful it is in presenting that point of view, the harder it becomes to simultaneously be a critical voice. Remember when the Reagan campaign wanted to use “Born In The USA?" The seductive rah rah bombast sound of the song overpowered Springsteen’s ironic intent. It was, I believe, meant as a comment on the plight of returning Vietnam vets, who were confronting the contrast between the rah rah patriotism all around and their own situations.

For me, the solution to this dilemma is to put a song with a questionable point of view in the mouth of a character in a theatrical show, where one can clearly see and sense that it is their point of view and not that of the author. This is what writers of novels, movies, etc. do all the time. In movies, like a stand-alone song, the identical problem occurs—kids identify with Tony Montana, when I can only assume that Pacino or the director meant it as a form of ironic commentary. It’s less of a problem in books, I suspect, where we don’t have to identify with the main character as completely. The unreliable narrator is an acceptable device.

But with songs and movies it’s an ongoing issue. Once you see what Teng is getting at you can never hear the song the same again, and you realize how cleverly she has embodied the point of view of the data collection company, thus rendering her criticism that much more profound and deeply disturbing. But you have to get there first and the seductive trap remains—its potency doesn’t diminish even once you know it’s meant ironically.