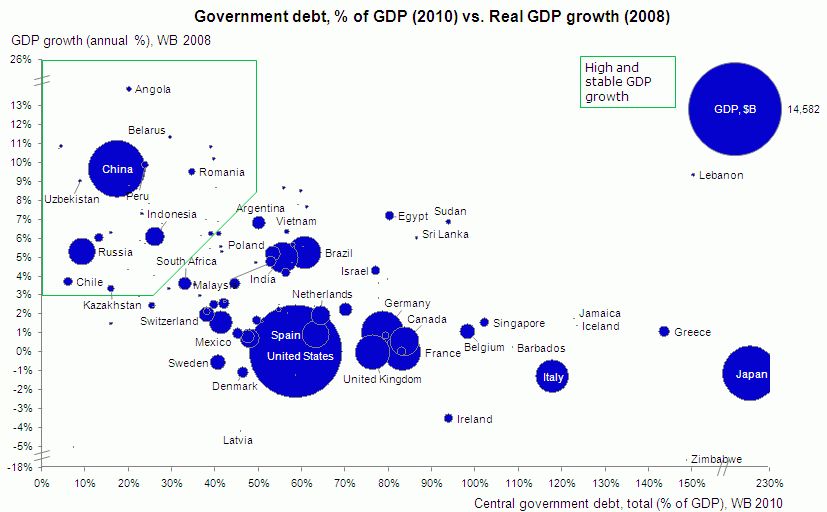 The graphic above tells three things—how big a country’s debt is, what percentage of their GDP (gross domestic product, what a country makes) is their debt, and what is their growth rate. Greece’s debt is small compared to the US, for example, but it is a much larger % of their GDP. The growth, surprisingly, is about the same. Angola! WTF!

Like many, I've been following the mess that is the situation between Greece and the EU and the Troika — the European Commission, the European Central Bank, and the International Monetary Fund. What a mess. The present government of Greece inherited this mess and won the election vowing that his countrymen wouldn't face further cuts to their pensions and much else. But the country is out of money...again...and if they default on their loans, the EU will have the choice of kicking them out or forgiving those loans. They don't want to set an example by doing the latter; Spain and Italy would be next in line. But even the head of the IMF now admits that they know the loans can never be repaid...and a doc on Wikileaks shows that Angela Merkel feels the same way—she also knows that the loans can never be paid back. So that’s the third crazy option—to give another loan that cannot be repaid. What is this about then?

Some writers have said that because the lenders all know they can't be paid back that it's not about money. It's about control. Another round of loans would keep Greece beholden to the EU and the Troika in many ways— who would dictate Greek internal policies. It's a stick to get Greece to institute much needed reforms. While I agree there are probably many reforms needed, I'm not sure that the severe austerity that would be part of that package would be all that helpful. And, one can imagine how a people might bristle at the idea that outsiders would be dictating policies in their country, even if some of those reforms are much needed.

Austerity, on one hand, it seems sort of just deserts, if one borrows beyond one's means—but the lenders also know that by scaling back services it becomes even harder for a country to grow and pay back the loans and next to impossible to grow at the rate needed. It's a completely insane situation. John Maynard Keynes, the economist, walked out on the post WWI treaty with Germany—in which the victors demanded that Germany be punished by years of austerity. What that did, besides inflicting pain, was it created a festering animosity that is viewed as one of the causes of WWII. There is indeed a far right party in Greece.

The Troika has apparently made some concessions in their previous offer—some debt would be forgiven, and Tsipras, the Prime Minister of Greece, is at the same time trying to save face by holding firm—and he knows that they know that the loans cannot actually be paid back, so what is going on here? A saved face won't relieve the misery of millions of people—even though I suspect they too would choose saving face over more austerity—even though the Greek oligarchs who own all the TV channels are barraging their countrymen with “vote yes” ads and news reports that focus mainly on the yes rallies and more or less ignore the no supporters...(Maybe the no result means the Greeks know their media is biased and they ignore the TV propaganda—maybe it means emotions and pride win out.)

Without the loan other things would happen—besides being out of the EU—if the Greeks vote no then they will be viewed (reasonably) as a bad investment. Their banks have no money—where are they supposed to get money? Spain and Italy will be viewed as next in line, possibly. That’s a danger.

Bit of disclosure — I know Yanis Varoufakis, the embattled Greek finance minister, well — we've met, as I have known his wife, a wonderful artist, for years.

Zooming out from the news that appears every day, I tried to see the big picture and here's what this amatuer came up with (below). A friend in finance told me I was spot on!

How can any country that doesn't have almost exponential growth can ever hope to climb out of debt? 80% or so of the loans go right back into the pockets of the lenders, as far as I can see. So the borrower is supposed to believe they can somehow grow based on that 20% with the help of some pension cutbacks and higher taxes? And, the deal seems to be that the lender (the Trioka) gets paid back on the previous loan if they can convince the borrower to accept yet another loan? It seems an impossible vicious circle to this slightly naive observer. Unless there is exponential growth or massive assets to sell off the borrower (Greece or whomever) has no way out of this—they just sink deeper and deeper.

I ask myself—why does anyone get into this pickle in the first place? I supposed nations, like people, take these loans based on some fallacy of optimism, thinking they will be the exceptions who will magically beat the odds and grow at some surprising rate.

Years ago Greece hid their debt when that unfounded optimism seemed not to be playing out. And, I suspect, a lot of money that would have gone into the national coffers was also being squirreled away via schemes and tax avoidance and all the rest. They'll privatise some assets, as Russia did, and there will be a fire sale...if they even have assets.

I am trying to see where the happy ending could be here. Puerto Rico is watching. Is there any analogous situation anywhere? Here in the US there are arrangements by which the federal government carries some of the poorer states in some sectors--guaranteeing pensions and infrastructure, for example. No one blinks at being asked to do this. We see ourselves as one, and New York State doesn't argue that because in some ways NY is supporting the poorer states like Alabama (or California!) those states should be cut adrift . Hmm. Maybe that feeling doesn't exist in Europe.

So, what if the debt were forgiven? After WWII the debts of France and Germany were forgiven. Their economies recovered and eventually boomed and now they are the powerhouses of Europe. Things change. Portugal was once the big power, Spain too. One would imagine with forgiveness others would step forward ask for the same treatment. Wouldn’t they? Hello, Spain and Italy, again. Where would one draw the line?

I’m back to wondering is there is a valid analogy between the United States of America, or the provinces of Canada or States of Mexico, Brazil, etc. and the EU—granted, in those other examples, most folks speak the same languages and have the same, sort of, culture. Woops, there are exceptions—hello Quebec! Is the EU just having a hard time thinking of themselves as a nation? Are they just too young? Getting to this point wasn’t easy—the US had a huge civil war that almost tore the country asunder—it was fought largely for economic reasons I would wager—slavery being the immoral engine that drove the Southern economy. So obviously it’s not easy holding it together.

Is that comparison off—have I got it wrong?