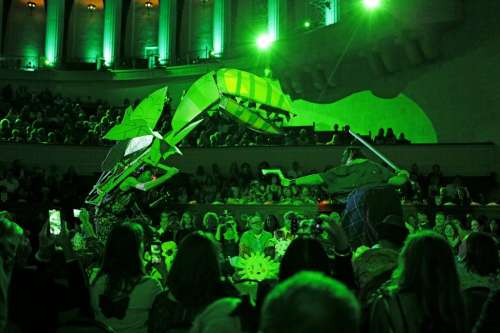 Beyond Trend continues to be one of the hottest nights on the Oakland art calendar, partly for moments like what happened Saturday night, April 27, when the fashion show featured an artist battling a Venus flytrap puppet that stood more than 7 feet tall.

The choreographed match between a kilted warrior/model and the killer plant concluded with backup dancers crawling down the runway with miniature flytraps chattering on their hands. The runway exploded several more times that night with dancing, paper fireworks and garments so richly colored they looked like they still might be dripping with paint.

“It’s really amazing,” said actress Mindy Cohn of “The Facts of Life” fame, who attended with runway master of ceremonies Mickey Boardman. Cohn had earlier tweeted her excitement about attending the show and said it more than exceeded expectations. 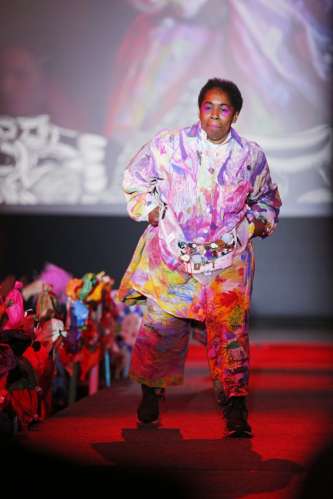 The 9-year-old runway presentation featuring clothing, sets and fine art by artists from the Creative Growth Art Center gallery has become a signature fundraiser for the Oakland nonprofit serving special needs artists, including people with autism, Down syndrome, developmental delays and other disabilities, including vision impairment.

Fashions representing everything from surreal gardens to Batman all had the hallmarks of Creative Growth’s artists, from the use of repetition to a style of figure drawing that has become recognizable to fans.

The dazzle of sequins, appliques, painted garments and theatrical headdresses worn by community models and the artists themselves are whisked away after the show to an art market on the first floor of the Scottish Rite Center, where the fashions and works of fine art are sold.

It’s an environment that mashes up the gallery world with the excitement of a designer sample sale. The clothing sells for hundreds of dollars, and the artwork can be in the thousands. 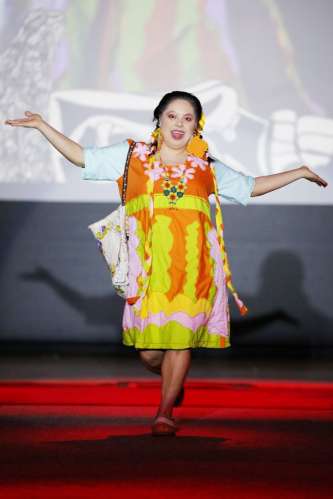 There are plenty of stars on hand supporting the cause.

The night’s special guests included Target Chief Creative Officer Todd Waterbury and Chief Diversity Officer Carolina Wanga as event chairs; the company is a multiyear underwriter of the event. Paper Magazine founder Kim Hastreiter was also on hand. And musician David Byrne was the evening’s honoree, making a memorable appearance on the runway with Creative Growth artist William Scott: Both wore “Star Wars” helmets with Byrne in a white suit painted by Scott. It was announced that one of Scott’s paintings would be going to the Museum of Modern Art in New York this year.

“I’m going to New York, I’m the greatest show!” Scott said from the runway. “And I’m going to be Darth Vader for Halloween.” 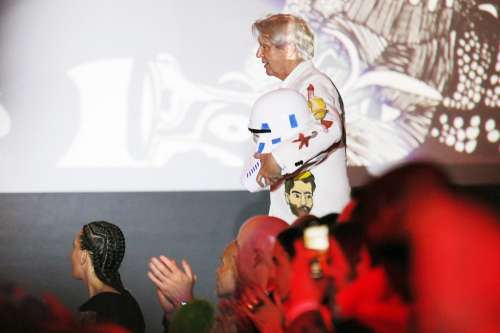 The 45-year-old Creative Growth is the oldest and largest arts organization serving the special-needs community in the country. It’s not only a pivotal player in the arts scene in uptown Oakland, but also one of the major forces promoting the work of special-needs artists around the world.

Creative Growth artists Dan Miller and Judith Scott are in the permanent collections at the Museum of Modern Art in New York and the Smithsonian American Art Museum in Washington, D.C., and have been exhibited at the Venice Biennale. Other well-known artists include Dwight Mackintosh, Monica Valentine, Donald Mitchell and William Tyler.

Beyond Trend has become a place where the tribe of Creative Growth collectors not only gets together, but frequently wears fashion created for previous shows. Noted collectors include Hastreiter, actress Gena Rowlands, fashion editor Sally Singer, siblings Ben and Chris Ospital of San Francisco’s Modern Appealing Clothing, and Byrne, who was presented with a painting by Scott. 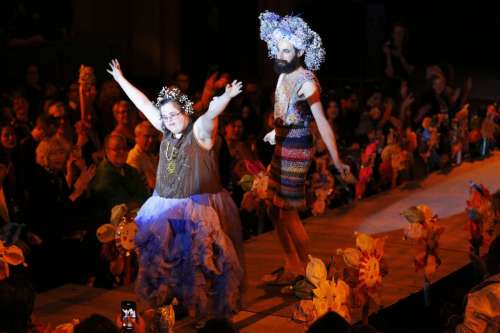 Longtime collector Joann Falkenburg wore a caftan by Casey Burns purchased at last year’s show — two glittery wings hung from the back. Falkenburg and husband Chad Graff are among the super collectors of the organization: They estimate 400 to 500 original works are in their collection, plus 50 fashion pieces from a long list of artists.

“In 2006 we went to a show and bought a rug by Vera Holland, that was the beginning,” Graff said. “We really fell in love with the art, and the artists. We live with as much of it as we can.”

The couple are working on a project that would take part of their collection to establish an art center in Nebraska, but will still live with many pieces in their homes in Oakland and Paris.

Tail of the Yak store founder Lauren McIntosh, who also served as the runway art director for Beyond Trend, has collected Creative Growth artists for 15 years with her husband Dr. Stephen Walrod, a former Creative Growth board member.

“The minute you walk in, you see our Dan Miller,” McIntosh said. “The work is all over the house, the library, the hall, the powder room is covered, there’s drawers full.” She estimates the collection has 50 to 100 pieces, not including prints. One of the artists she’s had a special connection to over the years is Monica Valentine.

“She does these sequin sculptures, and I have some of her wooden cutouts,” McIntosh said. “She’s a blind artist who feels light and color. They feel celestial, I first thought they were an angel wing or cloud when I first saw a few pieces.” 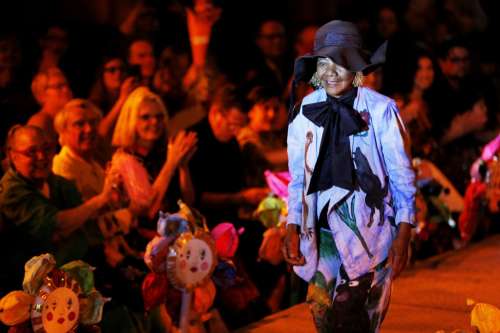 Doug Robson, a collector who recently joined the Creative Growth board, said the mission of the organization is part of why he and his parents supported the work.

“A lot of these artists would be marginalized, dismissed in other environments,” Robson said. “When you think about the backstory of the artists, it sometimes becomes the front story because of what they overcome.” But the mission isn’t the only thing that attracts him. “With all art, there’s a backstory. Look at Van Gogh. You wouldn’t collect Creative Growth art if it didn’t stand on its own; it has intrinsic merit.” 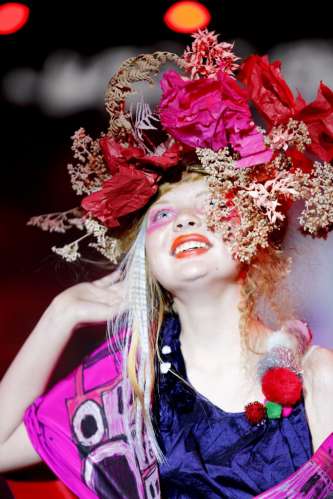