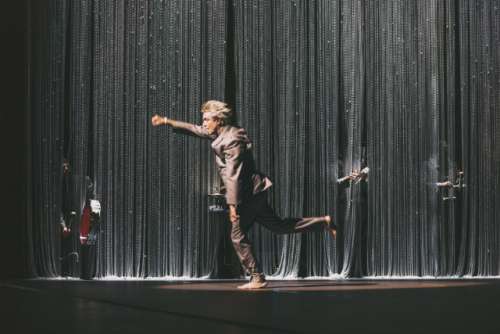 After a year-long international tour, David Byrne announced today that he will be bringing his American Utopia project/show to Broadway. "People ask me will I be darting into a town car after these shows or taking a flying leap onto my bicycle…take a wild guess," Byrne said in a statement.

Byrne has previously written two musicals: Here Lies Love, about Imelda Marcos, and Joan of Arc: Into the Fire. One influence on bringing American Utopia was seeing Bruce Springsteen's Broadway show last year; he told the Times he was impressed by "the way he disarmed any audience expectations that this was going to be a concert — in the first five minutes, they got what this was going to be."

In an open letter on the production's website, Byrne had this to say about the creation of the Broadway production:

As I was recording the songs for my American Utopia album it occurred to me that they would be exciting to play live- and I realized that a lot of my older material would fit right in….I imagined a live show….I pictured a lot of drummers, a kind of drum line/samba school/second line- that would create the rhythms...

A few years earlier I had toured with the musical artist St. Vincent, and we had a large horn section that we decided should be completely mobile. Could I liberate the other instruments in the band as well for the new show? It turns out I could - drummer Mauro Refosco, whom I’ve worked with for years, said we’d need 6 drummers to reproduce the necessary grooves. There is now a technology that allows a keyboard to be mobile, so Karl Mansfield (musical director) tested it out...

Annie-B Parson, whom I’d worked with a number of times in the past, came on board and we began to collaborate on discovering movement that seemed appropriate for the songs. Sometimes she gave us complex movement to try and sometimes, a little surprisingly, we’d discover, or at least I did, that the simplest idea could have a huge emotional impact.

Eventually I realized we were doing something no one had ever done before, or if they had, I didn’t know about it. When we began to put the show in front of audiences, I realized there was a kind of narrative there. Friends, and even strangers, began to point it out, and we all sensed it, as well. As a friend from London said, “The American Utopia of the title is there on stage.” I also realized that this narrative was not something told, it was something experienced.

"The staging is really innovative," said Gothamist's John Del Signore, who saw the concert version of the production last year and said it was his favorite concert of 2019, but apparently couldn't be bothered to write this post. "It's minimalist yet wholly theatrical. They do a LOT with very little, and they weave in key Talking Heads classics with the new material, and it's all fresh."

You can get information about tickets here.