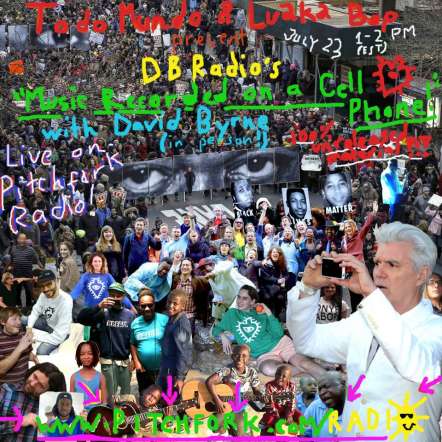 About two weeks ago, a friend of mine from South Africa posted a video of a group of boys playing a song—three guitarists, one lead singer and one boy playing a bucket drum. They are 7 years old and their guitars are bigger than their own bodies! It's really the sweetest thing… they play and sing with such emotion and passion, and what I could understand they had written the music and lyrics themselves. However there was no real information about who they were, so I spent several hours going through some 600 comments trying to understand how I could get in touch with them—or anyone really—that knew them. Finally, I was able to find the guy who shot the original video, who is helping them record a single and made an official Facebook page for the band.

I saw this video a day or two after the most recent police shootings surfaced in America. In all of the darkness happening around us at the moment, it made me think what a fantastic time we live in, when such terrible things as these shootings actually can be documented and become known to wider audience—or like how the music of these fantastic young children can travel outside the town in South Africa of where they live (another person on Facebook explained to me that he would see them rehearse behind a tennis court, in Vosleroo, outside of Johannesburg).

When we were invited to broadcast a show of DB Radio on the new Pitchfork Radio platform, it felt like a perfect opportunity to highlight something like this, and to try to honor and celebrate all those people out there who capture and share these things—who speak up and make these things known to other people around the world. We found more great recordings online, while others were sent to us from contributors to DB Radio, like Camilla Wasserman, who made an incredibly powerful recording at a protest march for Eric Gardner in 2014, and Joakim Bouaziz, who’d recorded a saxophonist one evening as he was walking home through Grand Army Plaza in Brooklyn, NY. The man was perched up against the great arch, with his motor cycle parked just beside him, playing sweetly in the hot summer night.

This month's playlist includes submissions from DB Radio contributors like Camilla Wasserman's incredibly powerful recording at a protest march for Eric Gardner in 2014, and Joakim Bouaziz's recording of a saxophonist one evening as he was walking home through Grand Army Plaza in Brooklyn, NY, as well as unreleased songs by David Byrne (“Send Her To Heaven”), Andy Noble feat. Little Gregory (“Searching for my True Love”) and The Messengers feat. Doug Hream Blunt.

Also, please (please please!) get in touch if you know how to contact the kids in this subway video—we’d love to work with them!