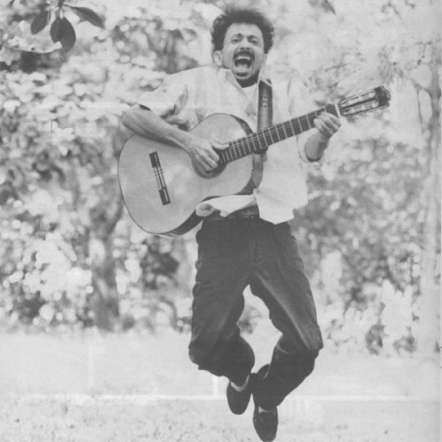 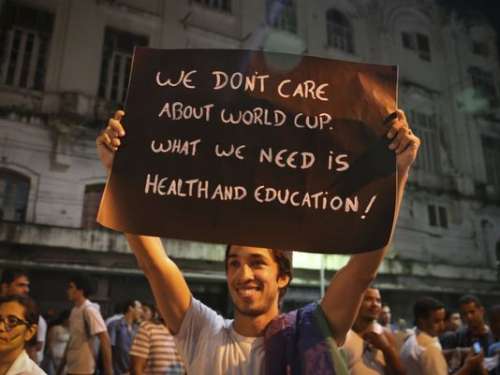 A man holds up a sign during a rally in Recife, Brazil. (Photo: Girish Gupta, USA TODAY)

I took at a peek at some of the Spotify Brazil playlists to see if my taste correlates and comes close to that of others, or to some algorithm, and though I suspect there are others (I can name some musicians I know) who gravitate toward the same artists as I do, I didn’t see any playlists that cover that same group of artists. The playlists I found lean towards Baile Funk, contemporary pop (very predictable) and the classics of MPB (música popular brasileira, Chico, Caetano, Gil, Djavan, Milton, etc.) Samba and Bossa Nova.

Mauro Refosco, a Brazilian musician based in NY that I’ve worked with for decades, writes me from Italy on this question:

Talking last night to Rogé's band members, they told me that in commercial radio stations in Brasil, nowadays 19 out of 20 top artists are dupla sertaneja, that really lame style of sugary mellow songs sung in two voices doing thirds all throughout the song, with lyrics that usually praise love or lost trucks or something irrelevant.

One of the guys told me how they got to dominate the media in such a way that is suffocating all other styles, and you certainly know that Brasil has many styles from south to north, east to west.

First the producers and promoters of these acts, have unlimited access to money, they told me that it's a front to wash dirty money that comes from the agribusiness, very shady nowadays in Brasil. (Just recently an airplane with 500 kilos of cocaine was on air approached by political federal and made an emergency landing. It turns out that the plane left from an airfield that belongs to a farm of the minister of agriculture, there you go.)

So, these producers approached radio stations that were famous for being Axé Music or Samba, Pagode stations that usually took bribes (Jabá) to promote those samba, axé artists and offered them 100K reais a week to play one artist in heavy rotation, an incredible bump from the regular 30K a week for the axé pagode acts. Not just that, they paid extra for the radio stations to not play other styles of music, meaning they are just establishing a single style as the role, creating a chain reaction of so much suffering to artists that don't want to follow that market.

So, after radio, they are now dominating TV stations, venues and popular festivals, like the traditional Trio Elétricos of Salvador and Festa Junina.

For alternative artists, the market has shrunk in such a way that lots of people are changing jobs. Either you get a big paying gig with one of these dupla sertaneja, or you barely make ends meet in the month being truth to your style and taste.

So sad to see how fast it deteriorated from the heydays of Lula, FHC to what's going on nowadays.

I will try again as I am quite sure I’m not as unique as I might think I am. But in the meantime, here’s MY current Brazil playlist. 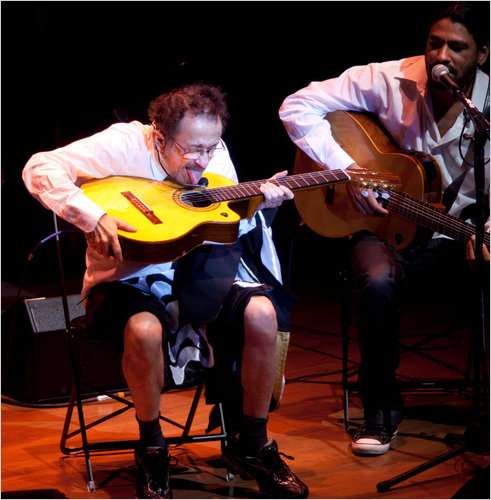 Elza Soares similarly is in her 80s, but like Tom her audience is primarily young and contemporary. She collaborated with young programmers and producers, and her latest record, The Woman at the End of the World, is as good a contemporary record as anything out there. I missed her Town Hall show, but she’ll be back this summer. 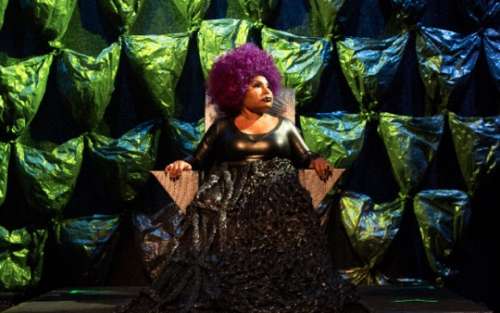 “Described as an album of apocalyptic, experimental samba sujo (‘dirty samba’) she tackles the issues of racism, domestic violence, sex and drug addiction in Brazil.

Soares hails from a favela (urban slum) in Rio de Janeiro. At just 12 she was forced into an abusive marriage by her father. In 1966 she had an affair with Brazilian footballer Garrincha, for which she was attacked in the home press. The pair were later expelled from Brazil by the military junta took power in 1969, like many outspoken musicians, returning a few years later. They had a son in 1976 before Garrincha died from alcoholism in 1983.” 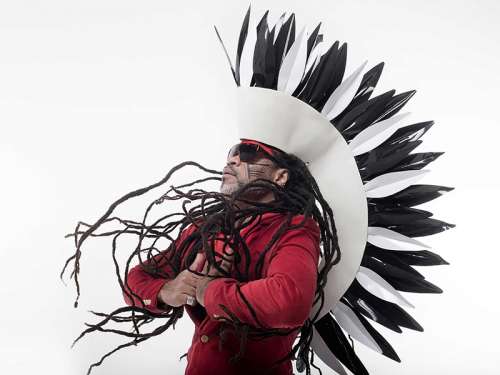 Carlinhos Brown (above) will be in NY soon as well. (I recommend his record Alfagamabetizado—almost every song is a killer… although for some reason it seems to be out of print). Besides being an incredible musician performer and composer, Brown is a social activist who has used music as a way of transforming communities. A documentary, Miracle of Candeal, covers one such effort—an arts center in a poor neighborhood in Salvador Bahia (where Brown grew up) that teaches kids music, theater and writing. These neighborhoods hold little hope for kids—their hopes and aspirations might tend towards being a gangsta drug dealer… but with the centers Brown has founded, there is an alternative. And it works. Not just the kids, but whole neighborhoods are transformed.

Brazil is currently going through some rocky times both politically and economically. During the Tom Zé concert, audience members carried banners deriding the “coup”—the removal of Dilma for corruption by Temer (the current president) and others who are much more corrupt than she ever was. Some audience members were even calling for her return, despite demonstrations in the past calling for her impeachment. 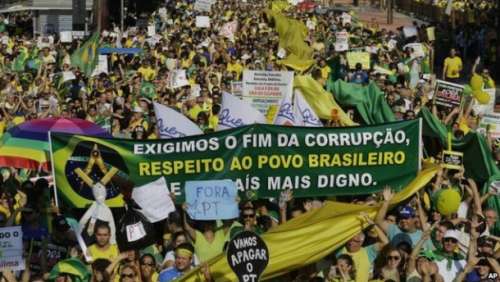 (Translation: End corruption, respect and dignity for the Brazilian people.)

Brazil had some years of growth and hope not too long ago.

“According to an old Brazilian joke, “Brazil is the country of the future—and always will be.” But the future may have finally arrived with the presidency of Luiz Inácio Lula da Silva (2003–10). Under Lula, Brazil seemed to have reached one of those moments in history when a society enters a new epoch. Lula came from a poor background and had very little formal education but he rose through the worker union ranks. Lula oversaw robust economic growth, chipped away at the country’s massive social and economic inequality, and pushed forth Brazil’s emergence as a rising economic and geopolitical power. Lula’s presidency was also a personal triumph: He left office with approval ratings of more than 80% in public opinion polls, making him the most popular president in the country’s history.

Central to this was Bolsa Família and other cash-transfer programs, as well as credit to small farmers for food production and pensions for workers in the country’s expanding informal sector, where an increasing part of Brazil’s labor force works. Anthropologist Aaron Ansell notes in his contribution to this Report that cash transfer programs began not under Lula but Cardoso, who originally sold it to the public as an efficient, market-friendly means of alleviating poverty. Under Lula, Cardoso’s limited program was extended to the entire poor population, while as under Cardoso the recipients were obligated to keep their children in school and see that they received regular medical attention. According to the World Bank, the poverty rate fell from 22% to 7% between 2003 and 2009 (though inequality as measured by the Gini index still remains very high).

Lula nominated Dilma as his successor. Whether it was her poor decisions or the sudden drop in the price of oil or subterfuges by the conservatives the boom did not last.”

Despite these economic ups and downs, the incredible culture of Brazil perseveres, and the quality of the music has not diminished.