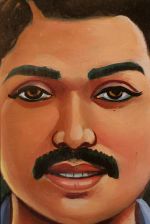 Years ago I was working in Madras on some music and visiting the surrounding state, Tamil Nadu, wondering to myself "what images are evocative of this particular place?" One's first inclination might be to photograph the people, the bustling streets or the temples, shrines and unique architecture. But after some thought I realized that what really possessed the hearts and minds of the people, besides survival and their religious and secular duties and obligations, was an altogether different cosmology—namely the constellations of film stars that are the relief, inspiration and source of joy for much of the population.

So I began to photograph them as they most often appear to everyone—their most common Earthly manifestations—in the posters, ads and billboards that cover the streets and buildings of every Indian town.

It occurred to me that in this microcosm of the faces of the movie stars—the Gods of Love and Action—lies part of the interior world of the Southern Indian mind, in miniature. Here are the faces and images that float through the minds of the people, here is the stuff of their daily hopes and dreams.