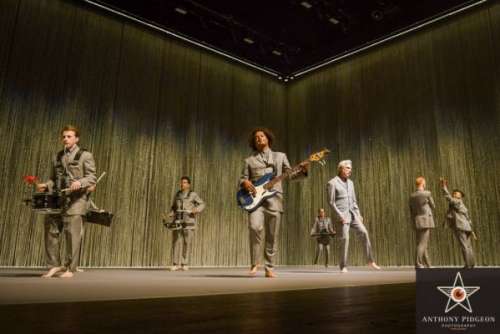 Forty-plus years into his musical career, David Byrne continues to push artistic and musical boundaries. His May 27th show at the Keller Auditorium was a superlative-inducing showcase of his visionary output, both musically and theatrically.

Byrne opened his set with the decidedly cerebral tone of “Here”, clinically diagraming a model of the human brain in couplets, then slowly built the set to an explosion of tightly choreographed rhythm, energy, and at times, joyous abandon. Barefoot, wireless, and outfitted in matching grey suits with marching band harnesses, Byrne and his 11 piece ensemble were everywhere at once, bounded only by 3 massive floor to ceiling walls of silver beaded curtains that they marched, weaved, and danced through. The complete absence of cords, amps, and stands, along with economic use of props and lighting gave the stage a minimalist, black box feel, with the silver curtains adding theatrical flourish.

Breaking up the percussion between 6 different players rather than utilizing a more static pop-rock backline showcased the polyrhythmic intricacies of Talking Heads favorites like “I-Zimbra”, “The Great Curve”, and “Slippery People”, as well as his later solo and new “American Utopia” material, and gave fresh context and urgency to other classics. While the marching band experience allowed fans a closer connection to the interplay of musical elements, the spare lighting and jagged choreography added an even more surreal, performance art aspect to specific pieces. “Once In A Lifetime” took on an added theatrical dimension, isolating the barefoot, grey-suited Byrne in a single, blinding spotlight as he lurched and staggered across the stage, grappling with shattered midlife illusions in the harsh light of sudden self-awareness, as if in a Shakespearian fever dream.

Completely untethered and with free reign of the open stage, Byrne and the band remained in motion throughout the set, exuding a joyful, energetic enthusiasm so infectious that the audience was on their feet for most of the show. The momentum continued to build through a mix of new and older material to the final 2 songs of the set, “Blind”, and “Burning Down The House”, which did just that, bringing the show to a final, fevered pitch. A single light framed performers at center stage, projecting massive shadows across the 3 beaded curtains, with sudden dramatic perspective shifts as band members emerged and receded as they marched and danced across the otherwise bare stage. Byrne closed out the encore with a dramatic cover of Janelle Monae's furious call to action "Hell You Talmbout”, a call and response shout-out to men and women of color who have been racially targeted casualties of ongoing police brutality. A powerful ending to a spectacular show.

Adding to the impressive and ambitious nature of the performance, Byrne declared from stage that the the show was 100% live, with no backing tracks. The ability to simultaneously entertain, explore, and provoke, combined with his consistently innovative output are just a few reasons why David Byrne continues to remain relevant, and has yet to stop making sense.

Rising star Benjamin Clementine was handpicked by David Byrne to open the American Utopia Tour, and the audience response was decidedly reaffirming. Only 2 albums into his career, Clementine's eclectic musical, literary, and theatrical influences make him a modern contemporary of Byrne in many ways.

Opening with his best known song, “I Wont Complain” Clementine's dark, powerful voice commanded immediate attention, imbued with undeniable echoes of jazz/soul legend Nina Simone. Stylistically, he blends a disparate range of influences, with deep roots in classical music, having become enamored with the works of Chopin, DeBussey and Erik Satie at an early age. Normally accompanied by a full band, the stripped down format he's revisiting as a support artist continues to present him with new opportunities to explore his evolving vision. Though his oeuvre is less immediately accessible than Byrne's, pairing him with this audience is the perfect introduction to a legion of fans that will likely be highly receptive to his artful message and unorthodox song structures.

Clementine's chops, willingness to take chances, commanding stage presence, and striking looks shortlist him as an artist with strong potential to develop into a creative force to be reckoned with.