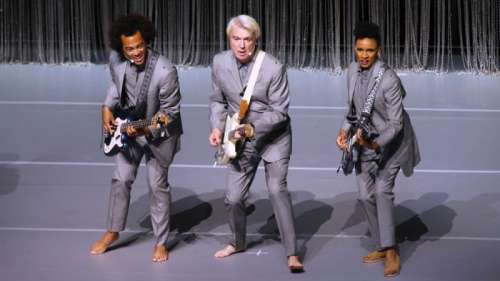 Earlier this year, David Byrne claimed that his American Utopia tour would be “the most ambitious show I’ve done since the shows that were filmed for [Talking Heads’ 1984 concert film] Stop Making Sense.”

It was a tantalising sell, but also a lot to live up to. To say he didn’t let us down would be a horrendous understatement. With this show, David Byrne has taken live performance to a whole new level.

Once again, he has taken a hammer to everything we know about contemporary music and beaten it to a bloody, lifeless pulp. You have never seen a show like this. You will hopefully never see another show like this again, because any imitation of this grand undertaking would almost certainly fall flat.

There’s no point in providing a blow-by-blow description of what transpired across this joyous 105 minutes. For one, it would spoil the show for anyone heading to see it in Melbourne or Adelaide. But, more importantly, mere words won’t do this performance justice.

In it, Byrne took in both the most primal nature of music and the wonders of modern technology. He mashed together the worlds of art, dance, theatre and music. He looked at how music is performed and tinkered away at a new way of presenting it that looks more beautiful, feels more joyful and sounds more exciting.

Byrne and his 12-piece band completely eschewed the traditional band formation, playing completely wirelessly, which allowed them the freedom to dance barefoot across the stage throughout the show.

Although freedom probably isn’t the right word to use about this show. Byrne’s show wasn’t about freedom, nor was it offering something raw and visceral. This was calculated within an inch of its life. Something with no room for error.

The dancing was brilliantly synchronised. The stage setup was stark, almost completely bare except for a table, a chair, a lamp and the musicians themselves.

The rhythms – performed by a group of percussionists instead of a traditional drum set – were frenetic but perfect. In fact, the musicianship was stunning across the board. Guitarist Angie Swann, bassist Bobby Wooten, and synth player Karl Mansfield did an awful lot of heaving lifting, and danced the whole time.

Backing vocalists Tendayi Kuumba and Chris Giarmo added an extra sense of theatre to the show, though the rest of the band pulled their weight vocally as well.

A lot of work has gone into this production and it showed. But Byrne’s songs are so full of life, and his band played them with such spirit that, it felt like a party. A weird, arty party, but a party all the same. It genuinely looked like everyone on stage was having the greatest time they’ve ever had, though they’ve probably never worked harder.

Byrne’s naturally stilted and frankly weird demeanour is on full display; his haphazard dancing, off-pitch warbling and awkward stage banter all very welcome trademarks that add some humanity to the overwhelming performance.

A greedy Talking Heads fan will find fault only in the setlist; none of us really wanted to hear seven songs from his latest album when his catalogue is so densely packed with stone-cold classics. But that only matters if you let it, because even the lesser known material shines in this setting.

Besides, we still did pretty well. ‘I, Zimbra’, ‘Slippery People’, ‘This Must Be the Place (Naive Melody)’, ‘Once In A Lifetime’, ‘Born Under Punches’, ‘Burning Down The House’, ‘Road To Nowhere’, ‘The Great Curve’… all these songs sounded as exciting, all these decades on, as they ever have.

The show is ultimate proof that it pays to work outside the parameters, no matter what it is you do. There are so many reasons this show shouldn’t work, and even an artist with Byrne’s influence undoubtedly faced a bevy of obstacles bringing it to life. But it was worth it.

If you have even a sniff of a chance to witness this show; please do not waste it. There is no one quite like David Byrne and seeing the full scale of his ambition in the flesh is both awe-inspiring and inspirational, as well as a whole lot of fun.