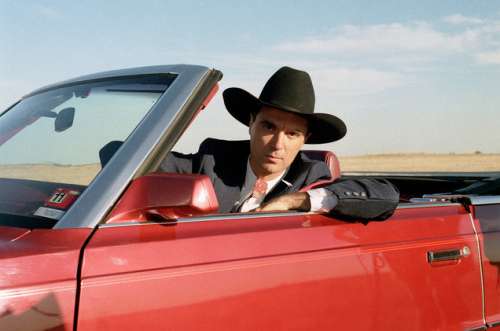 Courtesy of the Criterion Collection

David Byrne doesn’t usually enjoy looking backwards. He’s been known to request that interviewers don’t conduct nostalgia-focused interviews. The former Talking Heads frontman is constantly juggling new ventures, and he’d rather look ahead than reflect on the good ‘ol days. But for the Criterion Collection reissue of his zany 1986 directorial debut, True Stories, out Nov. 27, he’s willing to make an exception. The package — which includes a reworked soundtrack, an hour-long making-of retrospective, a series of essays about the film and a remastered cut — is the rare occasion Byrne is borderline excited about revisiting the past. “You know [those features are] what you're going to get in one of [Criterion’s] packages, and Criterion doesn't let you down,” Byrne said in a phone interview. “And with the mastering of the film it's like, ‘This is the version that we hope people see.’”

Besides, the film — in which Byrne’s monotone, cowboy hat-wearing narrator visits Virgil, a small Texas town full of beautifully eccentric characters played by like the likes of John Goodman and Swoosie Kurts — isn’t such a far leap from Byrne’s present. Since March, Byrne and his band have been touring behind his wildly ambitious, widely heralded American Utopia album. And when they haven’t been dancing around the stage in shiny silver suits and bare feet, with their portable instruments strapped to their waists, they’ve been visiting... well, places like Virgil during their free time. When we talk, Byrne frequently lets out a delighted guffaw recalling, for instance, towns with funny names or museums built on unusual concepts. To watch True Stories now, as Byrne tours American Utopia, is a reminder that in the past thirty years, while Byrne’s hair has gone gray and his voice has lost some of its roundness, his main artistic preoccupation has remained the same: Now, as then, he is America’s foremost celebrator of the nation’s overlooked oddities.

I have to start with a strange question: How are your feet?
David Byrne: [Laughs] Just fine, thank you. I was concerned about the same thing — either that my feet would start to show some wear and tear and eventually get sore or that I would split my nail. There's been cases where a little rivet or some bolt from one of the drums would fall on the stage, and you know, if you jump up in the air and land on one of those things, you could really hurt your foot pretty badly. But so far, no. And I've performed on some pretty funky stages. [My feet] get pretty dirty sometimes. But it's all fine.

What's been the funkiest stage?
New Orleans Jazz Fest. No question. [Laughs] It was plywood with chunks out of it. I think it might've been painted black, but it was basically just plywood with raw edges and chunks missing and all these kinds of things. But I just decided, “No, I'm going to go for it.”

We went to a Civil Rights museum at the Lorraine Motel in Memphis, which is amazing. Half the band went, at least. And we just walked around kind of stunned for the next couple of days. It was incredibly well done.

And then there's fun museums that also sometimes can be moving. There's a museum in Zagreb, Croatia, called the Museum of Broken Relationships. [Laughs] And that is exactly what it is. It's created by the public. People will send in an object along with a short story about the relationship that is connected with that object. And it might be an ex-boyfriend's t-shirt. There was one woman who had a relationship with a guy, and I think he might've been Peruvian, and he had a little Dutch Virgin or something which he gave her and said, “This is my mother's. It means a lot to me. I have to move on, but I'm giving you this to remember me by.” [Laughs] And then she at one point opened his suitcase, and he had a whole bunch of them in there.

You've toured across America, and the world, a number of times. But what have you noticed that's been different this time around?
Politics — not just in the U.S. but around the world in many, many places — is something that people talk about all the time. There's a lot going on. When we were in Poland, a bunch of their Supreme Court judges had just been dismissed by their president, and people were just outraged. There's a lot going on everywhere. So I sense that it's a time when people are really thinking about a lot of this stuff intensely. It means a lot to them. They're not always sure what to do, or how they're going to deal with what they see happening in the world.

So when you think back to making True Stories, what stands out to you?
I found it to be a wonderful experience. I was learning at the same time that I was doing stuff. I had directed some of the music videos for the band. But this time I really jumped in the deep end. And I kind of managed to stay afloat. So that was really thrilling to be able to do that.

When you make a movie, nothing ever goes according to plan. With True Stories, what didn't?
There was a tornado that came through. Our one big set build was the stage that the talent show is held on at the end of the movie. And the tornado came through the day before the shoot and wrecked it. We had to claim insurance, insurance didn't want to pay, and it became this haggle. And meanwhile the clock's ticking, and you've got all these local groups waiting and asking, “When are we going to be asked to perform now? When is the senior line dance group going to be available?” That was pretty scary. I was protected from that quite a bit by the production and creative team. Which, I'm glad I was.

Did the finished product meet your initial vision to a high degree?
Yes, it did. I remember I quite willingly tested it out in front of an audience before it was done. I know for some directors that's not something they want to do. But I discovered very quickly that the ending that I had wasn't working for an audience. They found it to be kind of depressing. Right after the wedding at the end, I had a funeral. Conceptually, that seemed to make sense. But for an audience, it was kind of a downer. And I realized, “Oh, we can salvage some of the dialogue and images out of that and we'll just take out the cemetery scene and the actual burial.” You learn as you go.

Have you recently re-watched the film?
Only to check the color adjustments that were made for the re-release. That was maybe the first time I re-watched the whole thing. I think it holds up pretty well. There are a couple of places where, you know, it might feel a little dated. But I don't think there's really any other film exactly like it. Although, I think it's pretty easy to tell what my influences were when I was making it — though, maybe not all of them.

Well, tell me some of them. Who was important to you?
Oh, there were lots. Obviously there were Fellini movies, which I saw when I was in school. Later on realized that some of them are kind of taken from his life. They're actually real stuff, but he just frames it in a way where it looks very surreal. Early on, I talked to Joan Tewkesbury, who was the screenwriter of the Robert Altman movie Nashville. She didn't help write the film, but she was very helpful. That was a film I liked very much. Again, it was an example of a film that had a thread pulling through but not a conventional narrative thread. I thought that was really wonderful: You didn't have to do things the conventional way and it could still work.

Can you tell me about building the soundtrack for the movie?
In a lot of the research I did, a lot of the location trips and everything else I did in Texas, I discovered there was a wide range of music being made there. There's all kinds of stuff. So I thought, “Wouldn't it be great if the movie could sonically represent all these different kinds of music that are being made there?” You're not going to be able to see it all, but you might be able to hear it all. So you get some R&B and some polkas and some country and western and marching band music and all this different stuff.

In your mind, watching the film again and now being embroiled in American Utopia, do you see any throughlines from one to the other?
Yeah, I do. I think there's a throughline where I'm trying to celebrate a lot of the creativity and the individuality that happens all over the country in a lot of small towns, medium-sized towns, in the fly-over states, wherever. To appreciate things that are often unappreciated — that still interests me.

Has your conception of those flyover states changed at all in the intervening years?
It probably has. I think I've become a lot more generous in my thinking. Not just in True Stories. It was obvious to me that I actually enjoyed those eccentricities and creativity of the people there. And I still get that. Part of our tour is through the Midwest. A lot of us came out thinking, “There's a lot to be hopeful for. There are a lot of people doing very cool things here, and a lot of people who are much more aware than gets reported in the news or on TV. These people are maybe not being appreciated nationally and internationally as much as they could be.”

Is there any part of you that's itching to make another movie?
Oh yeah. But I don't know what it would be. I've tried in the past and haven't succeeded. But I'll probably keep trying.