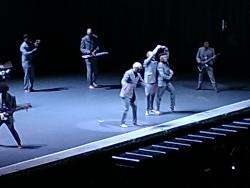 On Saturday, September 15 David Byrne performed at the Forest Hills Tennis Stadium. He played songs from his Talking Heads heyday and some of his more current solo career hits. The stage was set up quite differently from most shows. There was no set place where the band members stood and performed on their musical instruments. Instead they were roving around the stage, all barefoot and carrying their instruments with them from place to place. The Talking Heads songs evoked the greatest audience appreciation with several standing ovations and loud applause. David Byrne had played the Forest Hills stadium with the Talking Heads 35 years ago in 1983, and he made mention of it during the performance.

—Photos and story by Tony Barsamian