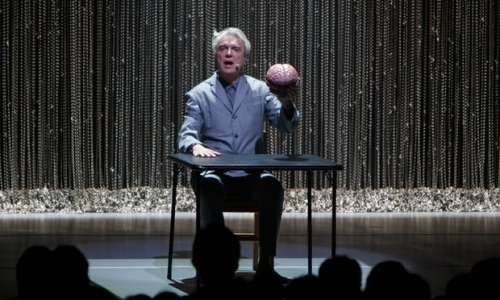 One strand of western thought still assumes that the mind and the body are distinct. To generalise, dance music is for bodies while art rock, say, titillates the mind.

David Byrne begins each night on the highly unorthodox tour for his most recent album, American Utopia, seated at a table stroking a brain – like a memento mori, only pinker. It is the only splash of colour on a grey, bare stage, encircled by shimmering beaded curtains. So far, so cerebral: the song is Here, from the new album, and its lyrics describe sections of the cerebellum.

Byrne was, of course, once the frontman of a band called Talking Heads (and not, say, Grinding Hips), whose anxious, querying post-punk appealed to lateral thinkers. In the magnificent 2017 film, 20th Century Women, set in 1979, the band are referred to as “art fags”. Another film – the 1984 documentary, Stop Making Sense, about Talking Heads’ concept-heavy Speaking in Tongues tour – set an artistic benchmark so high few other films about music have ever come close.

This tour is an artistic endeavour not far off Stop Making Sense’s high-water mark. Byrne’s youthful air of surprise has given way in recent years to a more professorial demeanour, to which he has recently added a foppish Andy Warhol haircut.

But one of the secrets of Byrne’s early success, mid-period extemporisations and absolute continued relevance is his devotion to rhythm. Byrne explained his choice of Stop Making Sense’s outsized suit to an interviewer at the time as a device to make his head appear smaller. “Because music is very physical, and often the body understands it before the head.”

This unprecedented, exquisite live show finds a 12-strong band in near-constant motion, with percussion to the fore: at several points, half a dozen musicians are playing bits of drum kits hanging off harnesses they are wearing, a cross between an American high school marching band and a Brazilian carnival procession. (The harnesses are so discreet, the keyboard player’s instrument appears to hover in mid-air.) Everyone is in (normal-sized) grey Kenzo suits and barefoot; by the end, backing vocalist Chris Giarmo’s jacket is entirely black at the back, and Byrne’s own back is piebald with sweat. There are moments where Byrne gnomically ruches up his trouser leg to reveal an ankle, or rolls up his jacket sleeve to reveal an inner elbow. At the end of a lot of songs, he hoicks up his trousers – since the tour began, you can imagine Byrne has shed the odd pound. 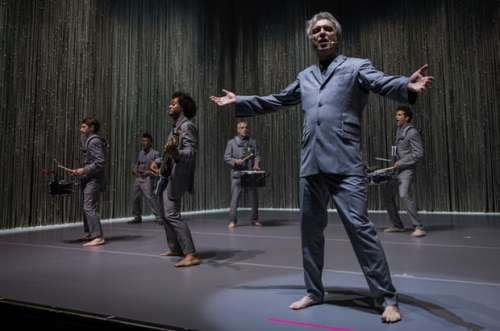 Pop is no stranger to troupe dancing, but working musicians don’t normally move this perfectly, rearranging themselves like psychic starlings into clumps or lines, posing, vogue-ing, proceeding backwards in circles; choreographer Annie-B Parson is the architect of these manoeuvres. You can see the link to a previous Byrne outing – 2015’s US-only Contemporary Colour shows, since released as a film – which found Byrne reinterpreting the US sports pastime known as “colour guard”, where flag-spinners join marching bands for half-time performances.

This set, by contrast, is all grey and minimal and yet somehow just as kaleidoscopic. A huge swath of songs – Talking Heads songs, Byrne solo outings drawn from various periods, covers, collaborations – have all been subtly rescored to fit a show heavy on funk, fun, drama, shadowplay and a sprinkling of overt politics. Between two recent songs – Dog’s Mind and Everybody’s Coming to My House – Byrne encourages everyone to vote “in every election they possibly can”. The second encore finds the band covering Janelle Monáe’s 2015 anthem Hell You Talmbout, which lists the names of young African Americans killed by law enforcement or other violent confrontations.

The old Talking Heads favourites are pure pleasure, spanning moods as diverse as I Zimbra, This Must Be the Place (Naive Melody) and a frankly magnificent version of Once in a Lifetime, which Byrne announces by staggering around, spotlit, quoting his own former movements.

Although released through Todo Mundo and Nonesuch, Byrne’s US labels, American Utopia was an album shaped in association with creatives at London XL Recordings subsidiary Young Turks, in which a phalanx of obscure electronic producers were drafted in to create novel soundscapes. I Dance Like This was probably the most jarring of these, with a chorus veering towards the industrial.

Live, it becomes one of the night’s unexpected highlights, more heavy metal than machine music. “I dance like this,” it goes, “because it feels so damn good/If I could dance better, well you know that I would.” Byrne and his troupe of musicians dance magnificently. You could say the also pretty much resolve the whole Cartesian mind/body split in the process.