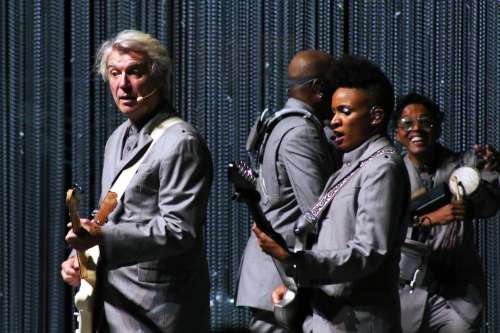 David Byrne’s American Utopia tour came to LA this weekend for a stop at the Shrine Auditorium, leaving a wonderstruck crowd in its wake. The mostly middle-aged crowd came to experience the latest opus of maestro David Byrne. What they got was a decent cross-section of new and old Byrne tunes and Talking Heads songs, performed in an extravagant, yet minimalist fashion. 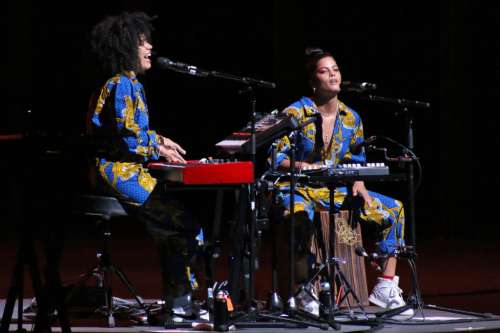 The show opened at 8:00 pm with Ibeyi, a French group consisting of twin sisters Lisa-Kaindé Diaz and Naomi Diaz (“Ibeyi” means twins in Yoruba, the Nigerian language of the sisters’ ancestors). Their humble stage arrangement set the tone for the evening; with the use of a few synths, samplers, percussive instruments, and their pipes, these two gals put on a powerhouse performance of their Afro-Cuban / French / Yoruba R&B music. While their experimental style and resonant voices were enough to engage the attention of a decent number of audience members, by the time they wound up their 45-minute set, they had the whole crowd singing along with them.

At 9:15 pm, Byrne started his set, alone, sitting at a little table on an otherwise bare stage, encompassed by curtains of silver beads. He was barefoot and dressed in the grey suit that fans may have seen him wearing during his appearance on The Late Show with Stephen Colbert, and he held in his hand a model of the human brain. He used the prop to indicate the different regions of the brain which correlate with the areas of its function, which he described through his song, “Here.” The song, which is the final cut on American Utopia, paints a picture of the intra- and interpersonal disconnects that people have been experiencing in the recent years of the Information Age. During the song, most of the audience stood transfixed by the stark image of Byrne onstage, as he sang the poignant song; meanwhile straggling audience members shuffled into the auditorium trying not to spill their cups of beer or plastic containers of nachos.

Byrne continued the show with “Lazy” and early Talking Heads tune “I Zimbra.” During these numbers, Byrne reinforced the album’s / show’s theme of modern societal dysfunctions, as his bandmates gradually joined him onstage. The theme was as stark as the imagery; all of his accompanying musicians wore grey suits sans footwear [actually, one guy wore shoes]. However, as discordant and nebulous as the show’s theme was, the performances were impeccable.

The choreography and lighting throughout the evening were minimalist and concise. In some instances, a single light source was used (even as a prop at one point), and at other times, Byrne’s bandmates concealed their bodies behind the beaded curtains with just their instruments poking out. Despite the predominance of intellectual attributes, the show’s musical arrangements were generally percussive-heavy, which kept the crowd dancing for most of the evening. 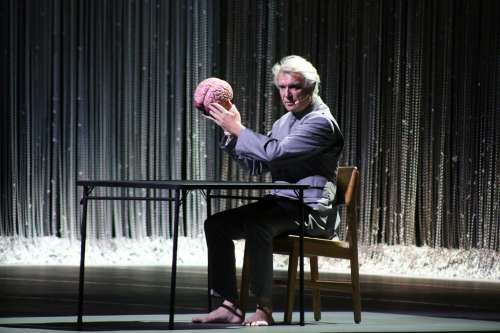 Highlights of the set included Talking Heads tunes “This Must Be the Place (Naive Melody),” “Once in a Lifetime,” and “Burning Down the House,” and American Utopia songs “Everybody’s Coming to My House,” “I Dance Like This,” “Bullet,” and “Every Day is a Miracle.” For the final encore, Byrne and his extraordinary group of musicians performed a cover of Janelle Monáe’s “Hell You Talmbout.” For the entire setlist, click here.

As astounding as the show was (testimonials were spilling abundantly outside the theater just after the concert let out), Byrne’s in-between song candor reinforced the earnestness of the artist’s attitude about the state of our country. His message was particularly effective as it did not emphasize a particular political stance apart from a few jabs at apathy; in fact, in addition to touring with the culturally-diverse accompaniment of Ibeyi, Byrne had also positioned the democratic advocate organization Head Count in the lobbies of his host venues. During a brief mid-show speech, Byrne suggested that audience members visit the organization’s site, make sure they were registered to vote, and join the organization’s e-mail list to receive information about upcoming elections, the backgrounds of candidates (including their lobbying / voting histories), and other pertinent information about opportunities to make our country into the best place that we can.