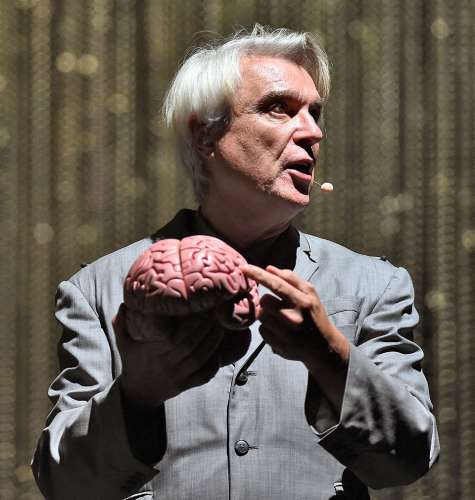 His hair is longer now, fashionably silver, his oversized suit permanently mothballed along with his 16-year career as the lead singer of the Talking Heads. When David Byrne first appeared onstage at the Landmark Theater Wednesday night, he might have confused a few ticket holders expecting to see a rock concert. Instead, on a stage designed to look like a giant silver cube sat a man in a tailored grey suit, neat in appearance but incongruously barefoot. No musical equipment, no drum kit, no amplifiers, no cords or wires, just a stage mic curving alongside his face and a human brain in his outstretched hand.

Half an hour earlier the opening band had stripped all their equipment from the stage, leaving empty floorspace. A table and chair had been brought in and that's where Byrne was seated when the lights went up. As a theater reviewer called in at the last minute to review this show, I thought a mistake had been made in my favor. The setting brought to mind Spaulding Gray's "Swimming to Cambodia," a stage performance filmed in 1987 by director Jonathan Demme who -- three years earlier -- had made the documentary "Stop Making Sense," a live concert film featuring the Talking Heads.

But then the music began, Byrne started singing, and yes, it was a concert after all. The years have been good to him. His voice hasn't noticeably aged or lost its tone, quality or range. In his dapper suit, so elegant compared to his clownish big-shouldered costume in "Stop Making Sense," he has a bit of Bowie in him, the Bowie of the Thin White Duke years.

Over the course of the next three songs, one by one nine musicians and two backup singers joined Byrne onstage, all of them in matching gray suits, all barefoot, all untethered like balloons that had escaped their strings. It was slightly mind-blowing to realize this wasn't going to be a stand-your-ground kind of concert; the musicians were free to move. Not once during the next 105 minutes did Byrne or his 11 band members stop, stand and sing and/or play from a fixed position for an entire song. Instead they moved, danced, and cavorted cord-free in a groundbreaking show that blended theater, shadowplay, dance and pantomime into a joyous, seemingly-carefree yet highly choreographed performance.

The "American Utopia" tour -- in support of Byrne's most recent album of the same name -- uses wireless technology along with a tracking system connected to automated lighting that follows the performers onstage. The precision mimics the lighting plot of a stage play and the storyteller in Byrne uses this to his advantage. During "I Should Watch TV," graduated stripes of deepening gray unfold as he makes his way to a flickering screen offstage, and in "Burning Down the House" the deep blue lighting ignites into a vivid red which flows like flames during the titular chorus. Yet even simple effects had impact -- during "Blind," a single bright spotlight angled up from the floor transformed the performers into vast shadows, making Byrne appear long, lean, and as ageless as a 15-year old.

Out of the 21 songs performed, a third were from "American Utopia," and even if you'd never heard the album, the lighting effects, choreography and staging made even unfamiliar songs engaging. The slow, cerebral "Here" opened the show with Byrne singing alone onstage to a handheld brain; halfway through his backup singers emerge from behind a metal ball chain curtain that serves as backdrop, eerily suggestive of two halves of the brain coming together. The tempo kicked up with "Lazy," a tune reminiscent of old Talking Heads songs; more band members appeared onstage, gigging in groups of twos and threes and leaving the center stage spotlight to Byrne. Hints of the energetic choreography to come first appeared here with hand movements resembling jumping jacks; by the end of the show several performers including Byrne were drenched, the light grey of their suits darkened by sweat.

While the audience listened appreciatively to the newer solo stuff, the house shook -- unsettlingly so -- whenever a Talking Heads song came up; by my count there were nine. In the front row of the mezzanine, although I remained rock steady in my seat, I bounced up and down from all the dancing around me. When Byrne strummed the opening chords to "Burning Down the House" on an acoustic guitar, cheers and whistles broke out. During "This Must Be the Place," a series of slow moves and gestures resembling tai chi were mimicked by the crowd, and for "Once in a Lifetime," Byrne left the chorus to the audience, giving hundreds of voices the vocal space to scream, "Good God, what have I done?" As the song wound toward its end with band members playing individually under spotlights that isolated them like water droplets, "letting the days go by" rolled like a wave through the audience as the band responded, "water flowing underground."

During a break in the music, Byrne announced he'd paired the tour with voter registration organizations to help get out the vote, noting that in 2014 only 17 percent of 18 to 29 year olds voted: "In Australia, if you don't vote, they take away your license."

That wasn't the evening's only political statement. For his second encore, he covered "Hell You Talmbout," a protest song by Janelle Monae that included shout-outs to Michael Brown, Eric Gardner, Trayvon Martin, and Amadou Diallo.

Standing in line to exit the theater, out in the lobby, even on the street, the predominantly 50-plus crowd could not stop talking about the concert. "I've seen hundreds of shows," one woman told me, "but I've never seen anything like this."

Local musician Larry Hoyt was taken with Byrne's performance: "He's about my age, but sometimes he exudes a childlike energy."

And out in front of the Landmark Theater, a nebbish bespectacled fellow with a pot belly under his black T-shirt raised his arms triumphantly -- perhaps a little drunkenly -- declaring, "David Byrne saved my life tonight!" Not sure about that, but I can confirm that he made a lot of Social Security-eligible folks happy.

And that's the problem with concert reviews compared to my usual theater reviews; I can praise Byrne's performance with a column twice this length, but these words are water flowing underground -- unless you've got free time and you find yourself behind the wheel of a large automobile. If so, point it toward New York City, the next stop for "American Utopia" September 15-17.